Keeping Dinner Down in 2020 America

The evils of government are directly proportional to the tolerance of the people: Frank Kent

The price of apathy towards public affairs is to be ruled by evil men: -Plato

The kind of thinking that sees Trump as a suddenly appearing phenomena born, like Venus, on a clam shell from hell and supported by the 40 million who voted for him, must keep folks who think like that awake at night. How to keep dinner down in the Age of Trump? First off, I think it’s important to remember that the worship of the Golden apparition on a descending escalator in 2016 has roots in the trajectory of American Elementary education starting after 1900 when the exit exam for people graduating after 8th grade (for many the only education they would even manage) was so demanding of verbal and calculating competence, this reader could not get through it, even with a post graduate education! Since then, the thrust of American education policy has been to dumb down the population because zombie people are easier to manipulate, and bamboozle. We see the articulation of that hobbling policy in the Bush years with its emphasis testing, not critical thinking. We see it in the embrace of Facebook, TV, and the vapidity of much popular culture.

Secondly, endless war brutalizes people, no matter whether they inhabit targeted countries, or pay the taxes to imperial governments that make war possible. War was and is the engine choice that drives the US economy. I say choice because many alternatives are not only possible but far more profitable. But war not only drives the US economy, it is also the engine that siphons wealth upward from the bottom economic segments to the top. It accounts for the actual theft of 50 trillion dollars from the poorest segments upwards to the very wealthiest over the past 40 years. War is how such theft is accomplished. War, and its supporting money-grubbing sectors that ignore global warming like fossil fuels, and fracking to name but two of the most obvious. 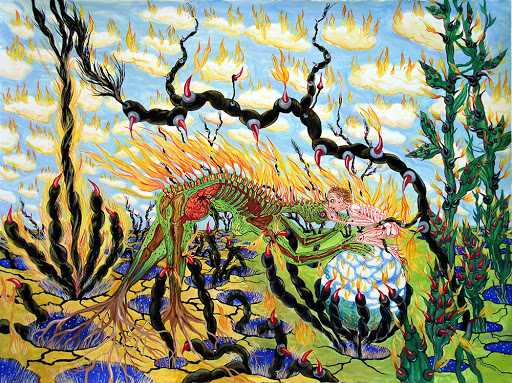 Until now government policy in the US has always made sure to allow the people just enough carrot to keep their minds off the stick—making things like cars, refrigerators, washing machines, electric kitchens, miracle cures and shopping within reach, keeping them comfortably governed and off the streets. Nothing extravagant like universal medical care. With such bribery, good people said nothing. Meantime the US threw its war resisters in the slammer. It killed any journalists who blew the whistle on real outrage. It underfunded and ignored its artists, its poets, its scientists and people with good ideas. It made sure to suppress the people who could or would not conform to its cultural norms. And it allowed its weak and vulnerable just enough not to croak of starvation in its streets.

But already under Truman’s experiment (he dropped two nuclear bombs on a civilian population of color, “it cost $20 billion. We have to use it”) such calculations started going south. They went seriously sour under Clinton (who shifted the Democratic Party’s focus away from representing its traditional base in favor of becoming just another business party and used Mena AFB in Arkansas to import cocaine in exchange for Contra weapons) to Bush, (who lied our way into destroying Afghanistan and Iraq, and with John Yoo enabled the Imperial Presidency) to Obama (killer of the Tuesday List, destroyer with Hillary of Libya, bail-out artist with Timothy Geitner and deporter of 2 million). Along with their proliferating “security” apparatus, all three nicely paved the way for #45. No surprising horrors on the half shell here. Just the dreary shell of a once-democracy. And good people still say nothing.

Dennis Kucinch once addressed Congress:….We make war with such certainty, yet we are befuddled how to create peace. This paradox requires reflection if we are to survive. Making and endorsing war requires a secret love of death, and a fearful desire to embrace annihilation. Creating peace requires compassion, putting ourselves in the other person's place, and all of their suffering and all of their hopes and to act from our heart's capacity to love, not fear."

CLICK for folks who want to engage with the election.

READ What Will it take to defend the election by George Lakey.

URGE Senate to suspend business until there is a pandemic relief deal.