HOW DUMB CAN A NEWSLETTER GET?

Judging from the evidence, pretty dumb. Our recent issue listed two salient reasons why the U.S. government in all its munificence chose to target assassinate Iran’s second in command, Qassem Soulemani, as well as other Iranian and Iraqi top functionaries.  It made no difference that Soulemani was on a peace mission to Iraq at the time, if anything, peace is a deterrent to U.S. “interests.” We listed two probabilities: that the attack came because Soulemani had been a successful adversary of ISIS and Daesh, both U.S. funded proxy armies destabilizing the Middle East, and that the Great Cheeto used the attack to guarantee his future election(s) as in “You  can ‘t change a horse in the middle of the Stream.” We might also have listed the attack as a distraction to downplay ongoing impeachment proceedings in the Congress.

How deplorably wrong we were. How sadly mistaken to suppose that the U.S. government made determinations from a rational point of view when the evidence points to something much simpler: the burning desire by some in high government places to hasten the Rapture. In case readers are baffled (or hold vestigial beliefs in separation of church and state) the Rapture is defined as a kind of marathon wherein the last trumpet acts as the start gun and the chosen (prominently among them are the very same high government functionaries) defy the laws of physics to be swept (decently clad in their underwear) into heaven’s high portals.

As #45 chief influencer in Iranian matters, we draw your attention to  Secretary of State, Mike Pompeo. We refer to one of a number of articles, this one appearing in The N.Y. Times of March 30, 2019.  Reporter Edward Wong refers to Secretary of State Mike Pompeo’s evangelical Christian orientation. Just back from his swing through the New Jerusalem (the U.S. engineered relocation of Israel’s capital) heady from visiting the grounds where Christ was supposed to have been crucified and buried, Mr. Pompeo held forth.

Asked if #45 had been “raised for such a time as this,” Mr. Pompeo replied without hesitation: "As a Christian(sic) I certainly believe that’s possible.” And when Mr. Pompeo talks about keeping Israel safe from victimization he refers to it as “a never-ending struggle until the Rapture." Evidently there will be territorial gains associated with the Rapture as well, according to Mr. Pompeo. One of his initiatives was to rid Israel of a diplomatic consulate in Jerusalem for Palestinians, and merging its work into that of the new embassy.

And to keep our readers in the know, just before leaving for Kuwait, Mr. Pompeo hosted a conference call with just “faith-based” media, excluding other journalists who cover the State Department, which refused to say who was on the call, or release a transcript of it, not unlike the Great Cheeto’s latest move to meet with Saudi officials secretly to talk about Iran.

Endorse Global Day of protest. Turn out for the January 25th call at
https://docs.google.com/forms/d/e/1FAIpQLScNrf_CDr9uilSQtUvnbcxNIaC29QwMnEqVPlPFane8ktEtqA/viewform

No war with Iran. Sign up to protest in your city at
https://www.codepink.org/01252020?utm_campaign=iran_national_tues_j7&utm_medium=email&utm_source=codepink 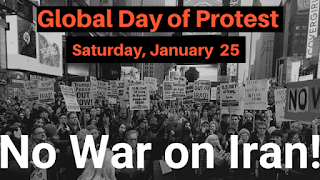 Stop #45 from more adventurism in  Iran at
https://www.codepink.org/nowarwithiran?utm_campaign=iran_national_tues_j7&utm_medium=email&utm_source=codepink

Urge your reps to support efforts to invoke Congressional powers through a war power resolution (202) 224-3121.

Demand McConnell recuse himself from any impeachment trial at
https://go.fightforequality.org/page/s/McConnell-Recusal?source=MS_EM_PET_2020.01.10_B1_McConnell-Recusal_X__F1_S1_C1__NS_RS

World leaders call on #45 to end warmongering and resume diplomacy with Iran.

In a victory for Hawaii’s indigenous people, the 30 meter telescope slated for Mauna Kea will not be built and Gov. Ige has ordered law enforcement to stand down.

In Argentina, 8 days of protest force reversal of cyanide law.

Sea Watch to resume its operations in Central Mediterranean. Italian courts rule that saving lives is not a crime.

Finland ends homelessness and provides shelter for all in need.

In huge win for activist coalition as Palestinians reclaim water source after 15 years.

Constitutional amendment to overturn Citizens United (sic) introduced in both House and Senate.

House progressive say Congress must act because #45 is acting like arsonist and fireman on Iran.

Thousands across U.S. send #45 message: no threats, no bombs, no war with Iran.

Study shows Medicare for All could save as much as $600 billion annually on bureaucratic waste alone.

Fresh calls to #raisethewage after peer-reviewed Journal of Epidemiology & Community Health study shows $1 increase (you read that right) could prevent thousands of suicides.

Sacramento youth activists push to get cops out of schools.

More than 25 cities light up the night against prisons and Migrant Detention Camps.

And best of  all: Oakland women take over vacant lot, rename it the 37MLK encampment to house the homeless. Tents sit in neat rows behind white picket fence, fairy light glow overhead and chickens cluck on the grounds.