WHY BAILOUT THE POLLUTERS WHEN YOU CAN BAIL OUT THE PLANET?

(The newsletter has a different look this week.  Here’s why:)

Of course our leaders want to “re-start” the economy.  As fast as possible please, and damn the torpedoes and all those death statistics. It’s back to work or starve. Because they want to obscure as fast as possible and as much as possible the marvelous changes such as clear skies and the end of oil COVID has wrought. And they’re hoping we won‘t notice. They don’t want to risk giving us any more time to contemplate what We the People might see while we observe social distancing and twiddle our thumbs:

We might see that it’s the most poorly paid workers, many of them immigrants, who are the ones really underpinning the essential economy.

We might see children, claiming they would prefer never eating meat again, advocating for parents working at Smithfield being forced back to work without proper protection.

We might realize that healthcare, specifically Medicare for all, not tied to wage earning is a non-negotiable demand.

We might notice that the guaranteed minimum wage could have the power to restore dignity to the enslaved and hopeless.

We might see the potential in towns and even businesses printing their own currencies.

We might notice that 29 House Democrats are demanding cuts to the Pentagon budget in favor of budgeting more for virus testing; 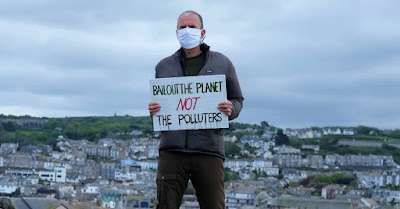 We might realize that criminalizing the giving of free food to those in need is no alternative to mutual aid.

We might consider taking up bike riding as both recreation  and a valuable means of transport;

We might realize that culling millions of livestock is no alternative for ending animal agriculture,

We might notice that sparing degradation to the environment by repairing and reusing gadgets and used tech has made a comeback.

We might appreciate car-free roadways with amble room for pedestrian social distancing;

We might notice all the extraordinary happenings world-wide reported by  Avaaz:

A 100-year-old Britton walking back and forth in his own garden to raise 32 million  pounds to support the UK health scheme;

Neighbors in Naples leaving solidarity basket on street corners reading: “put ii in if you can, take it out if you need;

A Syrian refugee volunteering to work as a hospital cleaner, joining 750,000 other Britons volunteering;

More than 200 Cuban doctors on their way to South Africa leaving their families behind to risk their lives fighting the virus;

Or thousands of researchers across the entire globe collaborating to identify an  effective vaccine against the virus;

Or Avaaz volunteers sending the Maasai of Nashulai in Kenya funding for food, health and sanitation in response to their urgent cry;

Or formerly enemy rival gangs in Cape Town agreeing to a truce in order to bring food to struggling households;

Or nurses world-over passing out from exhaustion, risking their own lives to nurse others;

Or restaurants, like the one in Bangalore, feeding more than 10,000 vulnerable people every day; 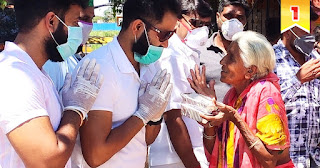 We might begin to realize that, with a disproportionate number of  black folks falling victim to the virus, their vulnerability more than ever makes the case for reparations;

We might get it at last that prisons and detention centers are no way to treat people, or “rehabilitate” them.

We might realize that the world-wide lockdown is providing a huge break for nature:
Clear skies,
Crystal-clear water,
Unterrified, emboldened birds, animals, and even cetaceans.
Improved air quality.
Slowing of arctic melt.
Repair of the ozone layer,
Cooler temperatures.

We might come to realize that left to itself, nature can repair itself in less than three months! something that what no human interventions, national governments, or world-wide bodies could accomplish, let alone address, in decades.

Now that Coronavirus has triggered a 17% emissions drop worldwide, experts are pointing to the fundamental structural changes that will have to be emplaced if we are save our future and that of all humanity, including those still unborn, on this Earth.

Will we “get it” in time? And can the military, the corporations, the elites, and governments worldwide, change their business-as-usual ways as already We the People are learning to do?