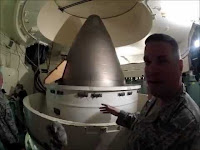 Over the past many years, many activists have demonstrated against the use of these weapons of mass destruction—one of the first being Carl Kabat (still at it in his 80s, still risking arrest) with whom I occasionally corresponded during his long months in jail—none of them have thought to adorn any Minutemen with warm, soothing liquefied butter prior to adorning them with petals.
Posted by Cecile Pineda at 11:18 AM No comments:

WORDS TO MEND A WORLD