Skywriting Dicks: Pentagon Climate Crimes Are No Joke
reprinted with permission from Went2theBridge 11.16.17

As a thought experiment, I decided to imagine that I lived under the threat of bombs raining down on my family from U.S. airplanes. Say, In Somalia. I could live in any one of dozens of countries for this to be my reality. Not Canada, though, which borders Washington State and was treated to this expensive, polluting  display of sophomoric scrawl by U.S. Navy warplanes [last] week:

The most monumental thing to happen in Omak. A penis in the sky     pic.twitter.com/SM8k1NYaj  Anahi Torres (@anahitorres_) November 16,  2017

In my thought experiment I tried to imagine how a grandmother in Somalia or Afghanistan might view this picture of boys just having fun….

Corporate media works hard to avoid meaningful context, simply reprinting the bland lies of the Pentagons PR department. Most ran the news with a headlines referencing “obscene” images. But what is the real obscenity hiding in plain sight here?

Media outlet SF Gate’s coverage of the prank included footage of the Blue Angels stunt team practicing over San Francisco in advance of the upcoming air show there.

The Blue Angels are a carbon belching nightmare. (At our expense. As we learned from the Panama and now the Paradise Papers, rich people don’t pay taxes. As a public school teacher my tax rate is around 30%) 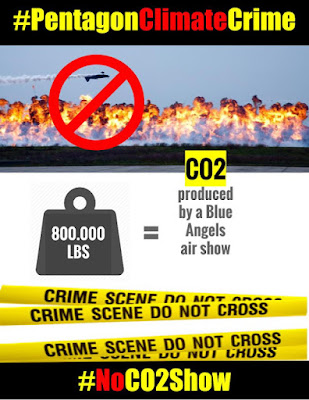 Here in Maine, they literally burn napalm as part of the “entertainment”. Those watching do so no doubt in the context of having watched thousands of fires kindled in cinema for their viewing pleasure. (Hollywood has a pretty gruesome carbon footprint, too.)

The thing is, you may be able to evade taxation, but the cost of climate chaos falls upon rich and poor alike [although] climate justice organizers know that low income communities suffer more from the toxicity of late sage capitalism.

But we’re all here on the same planet, buffeted by hurricanes, and scorched by forest fires. 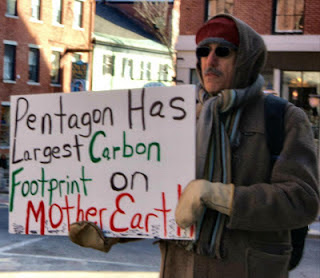 Whether skywriting or scoping out their next civilian bombing targets, the U.S. military is filling the atmosphere with more greenhouse gas than any organization in the world. But if you search for information about the Pentagon and air pollution. what Google will let you find are articles about planning for the impact of climate change on coastal military bases. Or about the U.S. Navy greening itself, which is a bigger joke than a dick in  the sky for sure.

Our corporate masters can manage information and cheat inquiring minds of the truth, but ultimately they can’t fool Mother Nature.

From all indicators, Michael Flynn seems to have gone rogue, cooperating the Mueller investigation.

Changing ratings seem to indicate that Democrats may enjoy up to four dozen electoral possibilities., with Dou Jones poised to win 48-44% the Alabama seat which would marrow the GOP majority to 51-49.

Tim Keller won the Albuquerque mayor’s race with a publicly financed campaign and a progressive platform.

Best of all: Miriam Martinez-Lemus, mother of childhood diabetes afflicted daughter, is no longer in danger of deportation thanks to thousands who signed MoveOn’s petition.
Posted by Cecile Pineda at 1:24 PM No comments:

There’s a new hue and cry to distract the American couch potato: who groped whom, and when?

When is sex not sex? Marsha Gessen writing for the New Yorker, makes the point that with the increasingly permissive attitudes towards sex in America, Americans have mounted a new war: the war on sex.

So far much of the brouhaha seems to center around transgressions by powerful white men in media and politics. Titillation is supplied by the when? by whom? and where in the pussygrab to rape spectrum. (The victim is immaterial—as Lady Bracknell would have said.)

The 14-year-old kid on the bus yesterday with a look on her face of panic and utter despair, and who tells the bus driver that she’s sick, but who really is being assaulted in her bed every night by a drunken step father, what kind of warfare is that? He’s older, more powerful, and her mom won’t believe her because her mom is also a victim who has to put up and shut up. How will the 911 hook and ladder respond to that after it comes roaring, lights flashing down the street? We can’t exactly call it class warfare, but it is the kind of abuse characterized by asymmetry.

Taking the longer view, today’s story is a story with bearing on social organization: how a society fits together to move the cogs that keep it going.  What are those cogs? If a society gets serious about ending sexual abuse, it will have to look deeper: at its reliance on both hierarchy and patriarchy to keep it going. And if it is really serious—beyond its need to be alternatively titillated and/or scandalized—it will have to examine both. And if it is to develop new ways of seeing and doing things, it will have to take a serious look at societies organized along egalitarian, non-patriarchal lines in order to learn from them, and it will have to understand historically how it got that way.

Any takers for the heavy lifting?  or just a bunch of handwringers?

(Disclaimer: I wrote about issues of hierarchy and patriarchy like one possessed. For a more in depth discussion read Apology to a Whale: Words to Mend a World published by Wings Press in 2016.)

Switching channels, the survival of life on the planet hangs in the fragile balance of a hold-out imperium which has officially lifted its leg on the Paris Accords on the one hand, and potential for some 400 nuclear reactors world wide, especially in the presence of rising seas, to cause more Chernobyls. And just this week the Washington Post reports that Keystone hemorrhaged 210,000 gallons of oil on the eve of a permitting decision.

Tune in next week.

Posted by Cecile Pineda at 12:00 PM No comments: 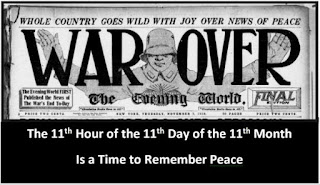 In the rush to militarize everything that moves in these United States, the only calendar day celebrating that rusty concept called PEACE has been rebranded as Veterans Day, this in spite of the fact that returning vets are twice as likely to become chronically homeless as other Americans..

Yesterday, while many enjoyed the long weekend, No Nukes Action Committee held its monthly rally outside the closed doors of the Japanese Consulate, memorializing the three-core meltdown at Fukushima-Daiichi on March 11, 2011, and drawing public attention here and in Japan where the monthly event is live-streamed, to the  dangers inherent in a technology that has exploded the genie bottle never ever to be stuffed back inside. The soils, the waters and the forests of Japan are contaminated for all eternity or for 250,000 years, whichever comes first, and ever since 2011 the oceans of the world including all the living beings living there are contaminated because of irradiated water constantly running off, some of it deliberately dumped. Fukushima is the gift that keeps giving and will continue giving. It is not yesterday’s news. It will be today’s news and tomorrow’s news for all eternity or for 250,000 years, which ever comes first. And all because of human negligence—such an accident could have been prevented with appropriate controls and oversight.

What does the nuclear industry, both its energy- and war-making cycles have to do with a day once devoted to peace, a day which now—like any other American day, is consecrated to war making and global killing? (The United States has expanded its global war to include Niger, and Mali in addition to Somalia, Yemen, Syria, Pakistan, Iraq, Afghanistan, and Libya. At the going rate, the wars costs each taxpayer an average of $23,000 a year.) The only economic rationalization for installing the approximately 400 nuclear plants now existing  throughout the world, justifying their disproportionate cost-to-benefit ratio is to develop weapons-grade plutonium. Nuclear energy and nuclear war are joined at the hip. And now the bombs that obliterated Hiroshima and Nagasaski, are a boy scout picnic compared to the potential for global destruction posed by the B-83 which at 15 megatons equals one thousand (1,000) Hiroshima bombs.

The Japanese prime minister, Shinzo Abe, a clone of Donald Trump, taking advantage of the growing tensions exacerbated by the United States between North and South Korea has been re-elected despite massive opposition. What might be instructive is to view Japan as a laboratory able to predict exactly where the United States is headed.

•46% of the Japanese electorate feel that the voting system does not reflect the people’s will.

•the passage of the secrecy act makes disparagement of the government a criminal offense, punishable by fine and incarceration.

Traditionally, Armistice Day was always observed with one minute of silence to commemorate the war dead, not just those who “served” but those millions of civilian victims, mostly women and children, of war. But yesterdays’ demonstration in downtown San Francisco could barely be heard at times for the horrific roar that blasted San Francisco’s streets. A commercial was being filmed for TV, and in a nation whose business is business, it’s no secret what comes first.

A Scattering of Roses Amongst This Month’s Thorns

New Orleans is proving that eliminating the bail system seems to work.
Posted by Cecile Pineda at 11:41 AM No comments: