(Special ask: Please call Governor Newsome at 916 445-2841. There are now hundreds of cases of COVID at San Quentin. Identify yourself, and leave a message for the governor. Ask him to declare clemency for those prisoners who have only a short time left to serve to be sent home to relieve the 190% overcrowding.)

Thursday of this week a navy destroyer, the U.S.S. Carl Nitze sailed into Venezuelan waters on what it called in new-speak a “freedom of navigation” operation, which means freedom for just-us, and blip for you. This action is just another of the dying Empire’s bullying tactics that have been its predictable practice since the signing of the Monroe Doctrine in 1823.

Knee to neck and neck to knee, who could ever have imagined that specific choke hold would become the spark that would ignite a rebellion already smoldering with massive job and housing loss and the twin plagues of COVID 19, and a bogus president?  It’s that knee to neck suffocation I hope to train my lens on today: the import - export of a commodity called murder. 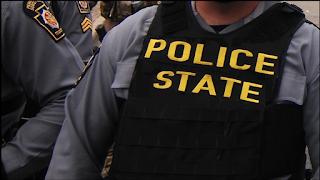 Here at home, it is the violence of our police shored up by qualified immunity and by repeated re-hiring of fired violent cops that triggers our attention. And what is the origin of that occupying-level of violence?

For the past twenty years, ever since 9/11, and the Project for the New American Century which advocated for the conquest of seven Middle East countries in seven years, domestic municipal police have grown dependent on the Israeli Defense Forces, the IDF to train its domestic police. Captains from cities like Ferguson have gone to Israel, and Israeli trainers have come here to train whole squads.

The goal of the IDF, its recruits drawn from the Israeli civilian population, has been annihilation of Palestine, and Palestinians, by shooting, torture, imprisonment, home demolition, obliteration of over 400 villages, and murder. It’s culture is that of an occupying force licensed to kill and deprive Palestinians of life, liberty and happiness. This is where our police goes to train. Is it any wonder that the IDF culture of occupation has metastacized to these shores and that municipal police forces and other so-called law-keeping bodies are behaving like occupational forces in their own country?

While this movement from East to West continues, equal forces have been going from West to East.  Specifically I refer to the beginnings of Middle East distabilization in Gulf I, where General ‘stormin Normin’ Schwartzkopf decimated the retreating Iraqi army as it fled the Kuwaiti border ‘like shooting fishin a barrel.’ Followed by the invasion of Afghanistan, Iraq, eventually igniting war in Yemen, Somalia, Libya, as well as repeated violation of Pakistans’s sovereign territory.

This wave of conquest meant to be a dying Empire’s show of force required a constantly self-enriching munitions industry to the great benefit of the elite, many of them members of Congress, and a poverty draft which ensures that, unlike during the Vietnam War era, the American public remains relatively aloof and unconcerned because it goes on in someone else’s backyard, and its army consists of poor farm boys, and boys (disproportionally people of color) recruited from the ghettoes of its megalopolises. Once their tour of duty and forced redeployments are concluded, these poor boys come home to their families and communities either wrecked by PTSD and its crippling anxieties, or they join the municipal police force where their taste for combat can continue to be expressed. (Chauvin, George Floyd’s killer, served for eight years in the army reserve.) Make no mistake, the lust for power, and killing can become an addiction. (See Chris Hedges: War is a Force that Give Us Meaning; Joseba Zulaika’s anthropologist’s perspective in Fire at Paradise Ranch; and Robert Fisk’s Great War for Civilization.)


A third force is at work here with the glut of over-designed weaponry that munitions makers keep churning out, their overflow often devolving via the 1033 program onto municipal police forces who buy bargain-basement tanks, armored vehicles, sound canons, tear gas, and assault rifles, this last movement representing our wars coming home to roost.

In conclusion, it might seem as though both movements, one from East to West, the other the reverse, have become a feedback loop

To disarm one will require disarming the other. And if we are to disarm our police, as a people we just might  have to consider declaring peace.

Police are trained by the IDF to apply knee to neck chokeholds. Refuse police brutality now. 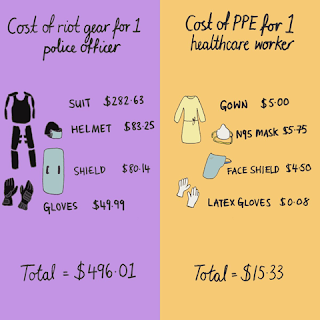 Now that Engel has been defeated by Bowman, please sign for a progressive leadership prioritizing peace over militarism.