“Pineda’s singular books perform dazzling literary feats of technique, history, and political responsibility. They display a range of technical sophistication that is hard to compare. To read Pineda is to touch on the miracle of humanity.”

I’ll be talking about two books, Love Queen of the Amazon, and Apology to a Whale: Words to Mend a World on Saturday, May 7 at 3:00 PM at Oakland’s Main Library, 125 14th Street at Lakeshore Drive in Oakland.
What kinds of books get written in happy times and why can't we have those happy books when we move into less happy times? Your opinions are as good as mine!

SOME THOUGHTS ON VOTING

Either way, whether you’re allowed to vote for Trumpton or Tonoftrump, you will get the same old same old, only this time even worse: endless war; charity for the .0001%, and destitution for the other 99%, not just in the US but world over. UNLESS YOU WRITE IN BERNIE SANDERS. It may not do your country any good, but you will have asserted your own dignity, your own manumission, and your community’s manumission.

US voting looks more and more like a rat laboratory: stand in line for hours, lucky if you get to push the food pellet lever when you get to those pearly (and hacked) gates, and a piece of paper which says I VOTED TODAY (that’s the pellet).

Trumptonism (Trump + Clinton= Trumpton) is not a option. It is a symptom, the symptom of a collapsing civilization, the hollowing out of a society by centuries of imperialism, centuries of war, centuries of beggaring a population, many without food, clothing or housing—and above all without means of coping with a post-industrial, soon to be post-technical world because of ignorance brought on by mis-education where “classrooms” are propaganda tanks for the dissemination of national myths.

As a primarily right brain person, I resort to images for much of my thinking. I try to pay attention to where I see us today (and by us I mean homo saps). Before my eyes I hold the ruins of Chernobyl. For me it represents the image of decay, the faltering of planetary systems, the faltering of the imperial state, the faltering of my own cohort to the indifferent scything of old age itself.

I see the State as hollowed out.  Its high court: corrupt; it education system: corrupt;
its legislative branch: corrupt; the executive: corrupt. Sandra Day O’Connor went on the record musing that maybe in retrospect she should not have cast her vote selecting George Bush in the selection theater of 2000. At the age of 86 she is rectifying that oversight by inventing video games—to teach kids civic responsibility, according to the March 28, 2016 crusty New York Times. As they say in the scrivening biz, you can’t make this stuff up.

I  happen to agree with Micah White. EMPIRES ARE NOT CHARITABLE INSTITUTIONS. But marches, demonstrations, vigils, protests IF THEY ARE WIDELY PUBLICIZED EDUCATE a segment of the population that does not walk by with blinders over their eyes, that may notice (out of their peripheral vision to be sure) that some folks are discontent. And of those few, even fewer may begin to wonder why. Moving a population as numb and dumbed down as this one takes a very very long time and lots and lots of sticktoitiveness. But it is NOT ENOUGH.

What would be effective? In my view, to counter the neocon agenda, the LANGUAGE OF RESISTANCE MUST BE REVERSED. If we cannot entertain DEMANDS, what then? We can have expectations OF OURSELVES. Intensions, Goals. Ambitions. But if we talk of self-determination, we remain mired in the cult of the self. Of individualism.
What then? Here are some nouns: people; popular. mass; massive; common; communal; group; collective.

We can combine these nouns and indirect objects, but to do so we need verbs, and no verbs are possible without ACTION. What are these verbs? We can DECLARE; we can OCCUPY. We can BUILD alternatives.

Now we need direct objects: streets, cities, banks, corporations, farms; factories; workers collectives; cooperative groceries, cooperative transportation sharing; cooperative energy sharing. We can shift our energies to creating new realities in microquantities. We can begin coloring in the coloring book of our time and place. Much of it is colored in already. We need to expand the areas, intensify the colors.

So far the ground work has been laid:
The occupy movement articulated the concept of economic disparity, and gave it a name: the 1 percent; the 99 percent.
The blacklivesmatter movement extending to the brownlivesmatter movement has articulated a position exposing the extension of the antebellum plantation in the form of police street lynchings; mass incarceration, and mass deportation.
The Bernie Sanders campaign has become a spokespeople, articulating popular aspirations. It must continue, regardless of Act Three of the 2016 Election Theater.

We must make demands of OURSELVES: Fearlessness: willingness to face police terror, sound canons, microwave canons, live rounds. Willingness to speak truth, remind OURSELVES who we are, what we stand for. Willingness to educate sufficient numbers so that no number of arrests (over 1,000 in DC recently) and no amount of carnage can possibly deter us.

When Trumpton is elected, we don’t have to move to Canada. We can BE Canada. 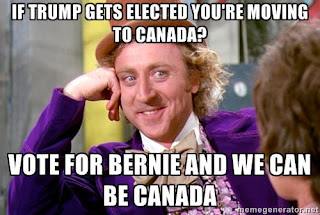