ARMS AGAINST A SEA OF TROUBLES


I want to devote this issue of the newsletter to a matter having a wider reach than our current political discourse (and lack of it).

In a recent conversation with a friend, she speculated that I might not want to get quite so “dark” as she put it, compared to where I “have been going” lately. Indeed, she is not the first. One friendship has been lost around this very issue. The issue of “going there.”

For some uncanny reason (maybe it’s genes) I seem to have somewhat less trouble than some folks “going there.” That seems always to have been the case, from the time when, as a very young person, I accepted the mentorship of three people who in various ways, had experienced being Jewish, living in Europe through the years of the Third Reich, each of them having paid variously and dearly for their experiences. That said, I experienced one period of high stress when this gift deserted me for some time.

I told my friend I was not without secrets, that I had some defenses up my sleeve. I think it may be helpful to some of the over 800 readers of this newsletter for me to try to share some of them.

The west is not the only fruit

While the western hemisphere basks in full sunlight, the eastern half of our planet lies in darkness. Without realizing it, most people of the west are completely in the dark about what the east has to teach us. Increasingly, our planet seems to have allowed itself to succumb to the lures of western culture, a culture based on individualism, competition, and the collapse of time itself, whereas for the most part, the east embodies in its cultures a slower pace of living, a more collaborative, collective view of work and life, and a sense of history rooted in the very distant past, a sense which lends opinion formation both perspective and humility. 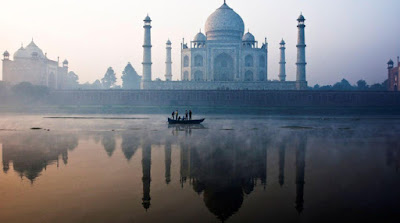 And that seasoned sense of time allows the viewing of technology, certainly as the manifestation of the western, one-sided state of mind, with a certain skepticism, and to recognize in its single-minded pursuit, an obsessiveness which characterizes any other religion. That untempered pursuit has gotten us earthlings in a mighty fix, one we lack language and vision to encounter. At best we have the glimmerings of new birth, an awakening piloted by children. In our growing dilemma, we forget that Earth is custodian of the music of Johann Sebastian Bach, Shivkumar Sharma, Nikhil Banerjee, Jimi Hendrix, Wolfgang Amadeus Mozart, and Sophie Watillon, and the painting of Michelangelo, da Vinci, Matisse, Courbet, and the writing of Shakespeare, Kazantzakis, and Sam Beckett, and the theater of Peter Schumann, and such thinkers as Buber, and Levinas, and the mathematics of Ramanujan, and the mysticism of St. Francis, and that we earthlings are the guardians of such treasures, which perish when we perish.

What other folks sometimes refer to as Creation, namely all things that live (including the human) is cause for study, and celebration, and some of them are things I have learned to hold dear. Trees, especially, occupy that part of my landscape—which is why I continue living where I do. Whenever I find myself in their presence, I notice that the air feels different, which I experience as a freshness, a coolness I find no where else.  I am breathing the air the trees have breathed. We are sharing this air, and I am conscious of their gift, and their great beauty and majesty.

Some time ago, when the East Bay Regional Park District announced their plan to clearcut thousands of trees along the East Bay Hills, I attended a hearing (a sham hearing as it turned out: the apparent jury declared at one point: “Oh, we’re not the commissioners! We are just the secretaries!”) I spoke. I testified, if you will, about what those trees meant to me after living under them for so many years. “I have put a lot of love on those trees,” I tried explaining.

The point here, is not whether or not I might have been heard by the secretaries, or their masters, but how I chose to encapsulate a feeling that is infinitely broader than words can ever express:  I hold trees—and all of creation—sacred.  In other words, awe is part of my life. I am not ashamed of it. I need it to lend dimension to the way I perceive human existence, and my own small place in the world.

At most, I am an accidental Buddhist. The story begins some 40 years or so, after experiencing two uncanny episodes, 15 years apart, of absolutely undeserved, and unearned serendipity. What I  appreciate about Buddhism is it allows you to think for yourself and progress at your own (sometimes pathetic) pace. It does not tell you what to think (although its amusing mythology attributes the Buddha’s birth to his mother’s encounter—not with a bird—but with an elephant)! For someone areligious, it appeals because it is not a religion; it is a path without absolutes, one adaptable even to slow learners. It offers few declarative sentences, and it poses its questions in the form of unfathomable koans. (All dharmas are inherently empty; form is no other than emptiness, emptiness no other than form - from the Heart Sutra.)

Over a great deal of time, in its mysterious way, little by little, its practice seasons the untamed soul. The small increments are barely noticeable at first, but over many years, they add up to a stronger sense of perspective, and balance, and strengthen one’s ability to count to ten, and above all to listen. It gives one the insight and courage to begin facing oneself. And to observe the distinction between saying “that’s good, that’s bad” vs. “I think that’s good. I think that’s bad.” In other words you give up any impulse to lay trips on other people, some of them ex-friends, and begin learning to take responsibility. And that growing sense of responsibility allows even willfully junglee people to grow up. A little.

What I especially like about Buddhism is one of its so-called noble truths: See things as they are. And that ability is essential if we are ever honestly to face the challenges coming at us thick and fast, and to become effective at doing something about them, not just smiling (that is the danger of over-Buddhism) and continuing on one’s placid way, but allowing the divine fire of anger to move us off our duffs.

Posted by Cecile Pineda at 8:58 PM