CAUGHT BETWEEN THE DEVIL AND THE DEEP BLUE STATES

Homer Simpson struck again this week: at the Republicrat convention, (the one in Cleveland) while civilians were being allowed to carry military-grade weapons in downtown Cleveland, such items as tennis balls, cans or umbrellas were banned.

On the other hand Nathan Fisher writing for Truthdig had a much more complex analysis to offer, namely that true structural change cannot come about by means of a Sanders program that insists on working within the system. “There is a reason this confusion exists, and the reason is that there is no viable or functioning political force arguing explicitly for a socialist political program. It is what the radical left is hoping to get out of the Sanders campaign and the millions of people whom it has revealed to have an affinity for a left-of-center platform. But the time is now, and we must value clarity.”

A Whiff of the ‘What If’

Political sophisticates would do well to read Nathan Fisher’s entire article (of which the above paragraph introduces the specific analysis he proposes). On the other hand, political pragmatists (and I am one of them) believe that those younger than 40 in this country have gotten a whiff of the green fields lying beyond the crushing and suffocating weights of business as usual and endless war. The Sanders campaign has gone beyond putting lipstick on a pig. It has opened the gates of ‘what if’ speculation. What if  we could begin to consider the Happiness Index of our own retrograde country as far-advanced Bhutan seems able to do?

To that end, I offer SOMETHING YOU CAN DO. AND DO RIGHT NOW:

It’s easy to send letters to each and every superdelegate- it took me about 10 minutes using the above site.  First, compose your letter (see sample letter below).  Go to the site, and click on the first state, Alabama.  Put in your information- you only have to do it once.  Double click on “select all,” then send.  Use the back button and go to the list for the next state.  Very easy.


1) Hillary’s naming of Tim Kaine as her running mate has antagonized Bernie and his supporters, probably beyond repair. According to David Swanson,
“Tim Kaine has been consistently ranked as one of the least progressive Democrats in the U.S. Senate, a supporter of “right to work” (for less) law restricting union organizing in Virginia, and he is a supporter of corporate trade agreements including the TransPacific Partnership (TPP) and including fast-tracking the TPP. An extremely loyal Democrat, he nonetheless criticized Democrats in 2011 for proposing higher taxes on millionaires.” 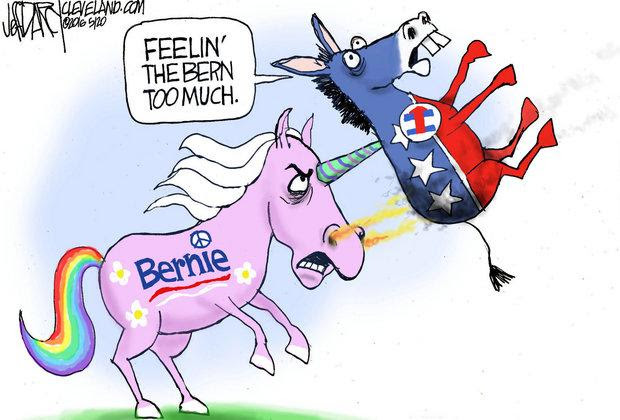 2) On Friday WikiLeaks published roughly 20,000 leaked emails from the Democratic National Committee (DNC).  They show that key figures on the Committee plotted to undermine Bernie’s campaign and boost Hillary’s since early 2005.  Despite this, Bernie has 1,832  delegate votes earned in primary elections.  Hillary has 2,219.  These numbers would surely been reversed if the DNC had maintained its mandated stance of neutrality, if the primaries had been honest  and the media fair in reporting.  Bernie is the people’s choice, and should be the nominee.

3) The Koch brothers are now supporting Hillary.  They are one of the main forces behind climate change denial.  Couple this with the refusal of the DNC to include a fracking ban in the platform, and we have a recipe for dooming life on the planet.  There’s no way that global warming can be stopped or even slowed with influences like this controlling the next president.

4) The gruesome spectacle of the Republican Convention indicates that Trump would be an unmitigated disaster.  Yet despite the blatant stupidity and nascent fascism in Cleveland, the race is still too close to call.  Trump is getting more savvy, and will run a devastating campaign against Clinton.
As of July 21st, 2016, the poll results are:

Here’s a sample letter, easily sent to every Clinton superdelegate by using http://www.lobbydelegates.com/delegates.php  It takes two clicks per state-about 10- 15 minutes.  You can write your own.  If we bombard them this weekend, they just might listen.
Dear Fellow Democrat and Superdelegate for the State of ___________________:

When the roll is called at the Democratic Convention, please keep in mind that given Hilary Clinton’s choice of Tim Kaine, pro-TPP, pro-coal, anti-labor, and anti-progressive taxation as VP, given last week’s Wikileaks revelation of secret DNC memos favoring a Clinton campaign as early as 2005 and plotting to undermine Sanders, given the fraudulent primary vote counts in such key states as California and New York, and given that the Koch brothers are now throwing their support behind Clinton, Clinton’s ability to beat Trump is very much in question, as you may remember from many previously conducted polls. I therefore urge you to vote for the stronger electable candidate, namely,
Bernie Sanders.
Sincerely, ____________________