(In a move to corroborate their competence, today’s newsletter examines the recent competence of a number of public servants)


Now don’t get me wrong, I don’t like coups.  And most governing bodies (GBs) don’t much like them either, because coups might do a lot of damage, not just to the GBs, but they might bring on collateral damage (CD). But there are some happy exceptions. Take Honduras, for example. We had to get in there, we didn’t have a choice. I just want to quote the PFCUSR: “Now I don’t like the way it looked. [And I don’t like] the way they did it…where they sent, you know, the military to, you know, take him out of his bed and get him out of the country in his pajamas.” She’s a real fashionista. She would have preferred a three-piece suit. But you don’t get everything you wish for, even as a PFCUSR. And for sure she knows how to dodge and weave, and she’s a stickler for correct procedure, and that’s what we need in a diplomat and a PFCUSR. Just listen to this: “If the United States (US) government declares a coup, you immediately have to shut off all aid…the support that we were providing…for a lot of very poor people. And that triggers (see how subtly she refers to crosshairs) a legal necessity. So our assessment was, we will just make the situation worse by punishing the Honduran people if we declare a coup and…immediately…stop all aid for the people, but we should slow walk and try to stop anything that the government could take advantage of, without calling it a coup.”
So that’s what a Prospective Female Candidate for the US Residency (PFCUSR)
recently went on the record saying, justifiably claiming that without a coup, the poor little Central County of Honduras (that’s CCH) wouldn’t be able to receive any more US AID, except you can’t call it a coup. It has to be something else, which is why they took him out in his pajamas and not a three-piece suit). Now AID to poor little countries like CCH is what the US always does best. We aid them. We aid them to take out people, people who cause trouble like Berta Cáceres and whose activities delay progress and things like dams. Because the U.S. upholds progress everywhere so we can expand our markets. Because the U.S. markets progress world wide. We want better market-share of better anti-personnel devices, better DIME bombs, better F16s, better AK47s, and better drones that go faster and are lots more effective making the world safe for even better Democracy (that’s capital D). 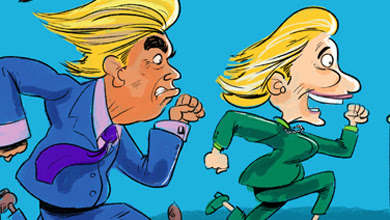 And without the coup in Honduras, the U.S. couldn’t send any more AID to poor little Honduras (CCH) except diplomacy doesn’t call it a coup. That’s why we have really qualified candidates running for residency because they’re hellbent on giving Democracy a chance.

Barely sworn in, in fact before Theresa May’s first day was out, as the UK’s current prime minister(PM), Theresa May showed she is on top by ordering the closure of the Department of Energy and Climate Change (DECC). The facts speak for themselves. The Department of Energy and Climate Change (DECC) was tasked with developing more energy and more climate change. Next she let bygones be bygones by naming her political rival, Andrea Leadsom, as Secretary for Environment, Food and Rural Affairs. Andrea is well qualified: as Minister for Energy at the Department of Energy and Climate Change (DECC), she kept asking if climate change was real. Which shows she’s a woman who’s deeply concerned. And isn’t all these women in high government office really proof that women have arrived at last—same as Barack proved Black folks are on the move. Anyway, Theresa May may have had other priorities in mind., She’s just launched an investigation about pedophilia in high places (that includes Parliament AND the Royals) which will go back to 1945. It stops there because all the high officials before then are already dead and anyway their victims are no longer kids. It’s just the guilty ones that are not yet dead).

Back to climate change, we all want to slow climate change as best we can. We leave our car motors idling, but just while we complete cell phone calls and send follow up text messages because we’re concerned not to drive while texting. We make sure to drive passenger pick up vans, shuttles, and large industrial scale trucks whose motors won’t start up again unless we allow them to idle while we 1) pick up passengers; 2) wait for departure until the schedule specifies; 3) load those great big trucks with scaffolding as we dismantle it from large construction sites, plywood  masking, wheel barrows and other construction site materials. And we only drive to work because it saves time, and anyway the BART (named after me) station is two blocks away from our place of work (although we sometimes have to park six blocks away).

The Environmental Protection Agency (EPA) keeps protecting us from lead contamination in drinking water, especially in cities like Flint, Michigan, which is primarily Black with a relatively large proportion of children who suffer anyway from stunted growth due to malnutrition. It protected us from FEMA which wants to treat all those 600,000 stumps of trees it plans to cut in the East Bay Hills from too much Garlon and Glyphosate poisoning the run off, which is why FEMA is allowed to spray it only for ten years twice a year, and not eleven years or more.

It protects our water from excessive radiation, which is why recently it upped the amount of nuclear contamination it’s safe to drink, allowing for only a 1 in 23 people cancer rate. Now see, that’s real vigilance because the EPA noticed on May 7 that there was a toxic leak at Hanford, Washington, where workers complained of a metallic taste in the mouth, and other things like high blood pressure (maybe they were unduly scared) and headaches, nausea, and a burning sensation in the nose and throat.

So in June the Environmental Protection Agency (EPA) announced brand new levels allowing for radioactive Iodine 131 at a concentration of 81,000 picocuries per liter, or 27,000 times more relaxed than the old level of only 3 picocuries, because it wants us all to relax. Even the workers at Hanford.

The beauty of this plan is it doesn’t throw taxpayers’ money around. No one has to go out in the field. No one needs to take samples of drinking water, or soil, or air, in Nebraska, or South Dakota or North Dakota, or Utah, or any other of the smaller regions, because the Washington-based Environmental Protection Agency (EPA) has the big (federal) picture (BFP), at heart and can do it just with numbers, crunching them between 9 AM and lunch; and after lunch till 3 PM, and after the happy hour, maybe until till 5.

FRACKING FOR URANIUM at the NUCLEAR REGULATORY COMMISSION (NRC)

Harry Anthony does a great job as the President of the Uranium Producers of America (UPA). He’s a terrific spokesman. Listen to this: “This is the most regulated industry in the world, but it’s never harmed anything….The industry has tried to work with the EPA to demonstrate that there is no risk to groundwater from uranium mining.” Now that’s a good spokesman. Especially for an industry which is tanking big time.

And guess what? Mr. Anthony even got the Nuclear Regulatory Commission (NRC) in the industry’s pocket. Because the Nuclear Regulatory Commission (NRC) came out with a ruling that if an aquifer is dead anyway, it can be used for uranium fracking, especially if it’s not somebody’s drinking water, except maybe when it’s connected to another aquifer—except you can’t be sure of it anyway.
And Mr. Anthony has lots of uranium history behind him. Like the City of Grand Junction took advantage of the Climax Corporation’s three hundred thousand tons of uranium tailings to mix with constructions materials. Just think of it: a whole city, so economical you didn’t even have to install street lights because it glowed in the dark anyway. (The whole thing had to be replaced at a cost to tax payers of only over a billion dollars.)

And plus Rocky Flats. Under the Bush administration Rocky Flats got cleaned up cheap and dirty—well maybe not so dirty. It’s now a National Park. You can play night time golf over the surface of buried nuke waste, with golf balls that glow in the dark. (It only cost the taxpayers over a billions dollars, which is pretty cheap when you think  about it.)

I, Homer Simpson have seen and approve this message.

Posted by Cecile Pineda at 2:30 PM