(These reflections are reprinted from Devil’s Tango: How I Learned The Fukushima Step By Step which I published on the first anniversary of the Fukushima catastrophe, an Hiroshima-Nagasaki under a different name.)

Ever since 1945 when the United States dropped two atomic bombs on Hiroshima and Nagasaki, much has been written and spoken about August 6. The gist of those remarks can be summed up as “Never Again.” Most Americans are not aware that the U.S. is conducting a nuclear war right now, and has been conducting nuclear war since 1999.

In Kosovo, in Iraq, in Libya, in Afghanistan, and in Somalia, the United States and its dark proxy, NATO, have made use of depleted uranium ordnance. It is used in Abrams tanks, A-10 warplanes, and Bradley fighting vehicles, in bombshells, tank armor plating, aircraft ballast in Boeings 747s, Bunker Busters, and fragmentation mines (otherwise referred to as “anti-personnel devices”). At least 15 other countries hold supplies of DU. In all, 320 tons were used in the 1991 Gulf War; an appalling 90 tons were used in only the first 24 hours of the “shock and awe” carpet bombing of Baghdad when uranium aerosols were widely dispersed in the atmosphere and blown across Europe so that 9 days later, on March 28, elevated levels of uranium exceeding Environmental Agency thresholds were picked up in various areas in Great Britain, a clear-cut case of the chickens coming home to roost.

Depleted uranium (DU) is an alloy of the radioactive, heavy metal uranium, with a lower content of the fissile isotope U-235 than naturally-occurring uranium. It is a byproduct of the uranium enrichment process that isolates the more radioactive U-235 isotope for use in nuclear bombs and in nuclear reactors as fuel. It has a typical isotopic content of 99.75% U-238 by weight, 0.25% U-235, and 0.005% U-234 with a half life of 4.5 billion, 700 million and 245,500 years respectively (see Wikipedia. “Depleted uranium”).

Its highly ignitable properties allow the DU penetrator to ignite on impact, generating extremely high temperatures. As it pierces its target, it leaves burned-off material behind, dispersing DU dust into the environment. The quantity of aerosol production is proportional to the DU mass within the projectile and the strength of the impact. Up to 70% of DU contained in the projectiles is aerosolized on impact when the DU catches fire. The explosion generates temperatures of between 3,000° and 6,000° Celsius. Nanoparticles so generated are smaller than 10 microns in size and act more like a gas than a particle. Because they remain air and windborne for long periods of time, they constitute the most serious threat to any human population close to battle areas. Marion Falk, a retired chemical physicist who built nuclear bombs for more than 20 years at Lawrence Livermore Lab, identified DU weapons as “dirty bombs in every way.” (Dipnote. Official blog of the U.S. Department of State).

WHY is DU USED?

DU is used by both the US and UK military for four main reasons:

•  it solves the problem of disposal of the nation’s huge stockpile of radioactive waste. it gets rid of anywhere from 200,000 to 300,000 tons of death ash the nuclear industry has so far accumulated on earth.
•  it’s cheap and in plentiful supply;
•  it’s effective in military engagement because its high density and self-sharpening qualities enable it to penetrate hard targets easily; it burns on impact, increasing its ability to destroy enemy targets.

It contaminates countries we don’t like. But it’s not out of our backyard: returning troops from various theaters of war bring it home—to the United States (and other NATO countries), in the form of radiation sickness (otherwise known as Gulf Disease), cancers, a high incidence of leukemia and birth defects among their offspring.

A COUPLE of DU LINKS

As early as 1953, Monsanto’s then-vice president, Dr. Charles Thomas, pointed out that nuclear plants could not be a profitable undertaking unless they provided bomb-grade plutonium to the atomic weapons industry. He advocated creating a dual-purpose plutonium reactor, one which could produce plutonium for weapons and electricity for commercial use.

Depleted uranium, as the by-product of the refinement process necessary to create both nuclear fuel and nuclear bombs provides the deadly component of DU-tipped ordnance used by the U.S. and NATO in its on-going nuclear wars. Thus it links the nuclear industry’s two arms, the energy and war making arms. It links both arms of the nuclear war-making industry as well: Low profile use of DU, and high profile atomic weapons.

“The Department of Energy’s National Nuclear Security Administration (NNSA) and the Pentagon together plan to spend $1 trillion over the next 30 years to “modernize: all aspects of the nuclear weapons stockpile: The bombs, and warheads, the production facilities, the delivery systems, and command and control systems.” according to Tri-Valley Cares Spring 2016 newsletter.  The 1,000 nuclear-tipped Long Range Stand Off (LRSO) the Air Force plans to field. Indistinguishable from a conventional warhead, it is designed as a first-strike weapon.

As the U.S. moves into the next selection cycle, either corporate candidate when selected will have a finger on the nuclear trigger. Whereas Trump’s nuclear track record is unknown, the Democratic option is known to be trigger happy, the author of two failed states, namely Libya and Honduras, the country with the highest homicide rate in the world. As a great friend of Israel, she has gone on record saying Iran must be obliterated. Never since the Cuban Missile Crisis has the U.S. been closer to experiencing a nuclear war. I like to remember that Hitler (kill record upwards of 6 million), compared to Stalin (kill record over 21 million) was the lesser of two evils. 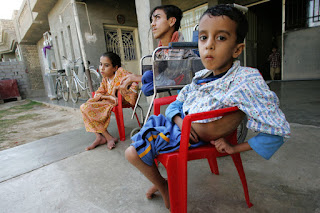 At the heart of the DU nuclear nightmare is something no one wants to talk about: birth defects, a whitewash word for children born without the attributes we recognize as human. They are the hidden casualties of irradiation in the womb. Thousands of these beings draw breath in the darkened rooms and corridors of orphanages, state institutions, and in families brave enough—or poor enough—to have to keep them, these constant reminders of a man-made tragedy that can never be undone. These beings live in concealment in the Ukraine as the result of Chernobyl—and in Kosovo and Iraq, and wherever else NATO’s occupying armies have irradiated the soil by dropping DU-tipped bunker busters and firing tank-piercing ordnance.

Almost every documentary film made of Chernobyl allows the viewer their full moment to recognize the image content, sufficient light to make it out—with one exception: birth defects, beings born with horrifying malformations: three heads, no eyes, lifeless limbs twisting out of rag-doll torsos. These are the images mankind strives to keep itself from seeing—these, and images of death and dying. These are the dark secrets kept in the subterranean vaults buried beneath the bright and lying surfaces of living. (No other writer that I know of has dealt with buried horror more truthfully than Ursula LeGuin, in her short story titled “Those Who Walk Away from Omelos.”) Yet every day, in our children’s toys, these images abound: the face of swamp man; Mr. Potato Head (minus the popping Disney eyes that make it ‘cute’). Picture these images now but with your own astonished eyes. Recognize in them the misshapen, grotesque beings that live in the hundreds of thousands, shut away in orphanages where none but the merciful with their forgiving eyes and hands manage to find it in their hearts to care for them.

How might a woman feel giving birth to a child with such deformities? In 2011 a Bay Area newspaper described one such woman, a woman accused of leading her four-year-old, severely handicapped child up four storeys in a garage elevator and pushing him off the roof into the street below. He suffered from torticolis, a twisting of the neck, and a condition resulting in a severely misshapen head. To reporters, her weeping husband said his wife should not be held responsible. She did not want this child. After his birth she suffered severe postpartum depression. He said how much he loved her, and that he could not find it in his heart to blame her.

Now imagine appointing one woman whose tragedy it was to be caught pregnant, especially in her first trimester, when Chernobyl blew, or when Fukushima blew, or during the years of  massive Pacific weapons “testing.” Imagine appointing her to join the panel of engineers charged with designing the “new generation of reactors” trumpeted by the Obama Administration, or the board of the Nuclear Regulatory Commission (NRC) or to the International Atomic Energy Agency (the IAEA). What effect would it have on all those men sitting on their boards— the suited hijackers of our planet—to be met with these silent women, holding their atrociously deformed children in their arms? Imagine these women forcing that child into the arms of each board member to examine and caress.

What does it mean for me today, the one hundred sixty-fourth day following our planetary nuclear catastrophe, to plumb the darkened dungeon of my own imagination, the place I have resisted from the beginning, to reach its darkest heart? What do I feel, I, a young-bearing animal, a woman, a mother? At my deepest heart, I feel rage boiling up, a cyclone which, if I let it, would explode, vaporize the walls that contain me. How can I possibly meet this rage without dying of it? How can I stop it from tearing me apart?

(reprinted in part from my  book Devi’s Tango: How I Learned the Fukushima Step by tap, published on the first anniversary of the catastrophe at Fukushima Daiichi.

See “The Biggest Lie Ever Told by the U.S. Government: The Necessity of Hiroshima”

and “Hiroshima: The Crime that Keeps on Paying”
Posted by Cecile Pineda at 11:33 AM