DEVALUATION OF THE GODS

How can people tell if they’re living in an occupied country?

That was supposed to be the substance of this week’s newsletter, “Twilight of the gods.” Why? Because each occupied country in the world (195 countries) has been assigned one god: the god to pray to when that particular country gets occupied by an invader. 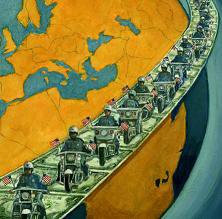 But prayer works only if it’s a military invader. If your country has been occupied by an economic invader, you haven’t a prayer. Why? Because no amount of prayer to the god of your occupation can offer any redress. The problem is that your particular invaders are visually non-identifiable, they talk American, wear the same clothes, sport the same haircuts, only more pricey, beat their wives, abuse their children, just like we do. So you have no way of knowing that you are living under occupation.

To uncover who’s really in charge visual aids would  have to be required of economic occupiers in order for ordinary people to be able to spot them. Such visual aids as:

We apologize to our readers this week because our original newsletter, “Twilight of the gods” has been pre-empted by “Devaluation of the gods.” A brief explanation is in order. With 195 gods, one for each occupied country, there were just too many gods, and too many countries for convenience. Whether you like it or not, a devaluation of the gods has been declared. A just-in emergency bulletin reports they’re being retired, every single god-jack one of them. From now on, you get One God for the former 195. That’s just how it is. So suck it up. 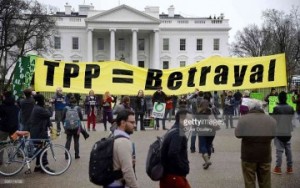 Just yesterday, I was interviewed about the Divine Devaluation by Planetary Press, a wholly owned subsidiary of World News. Inc. The transcript follows:

CP. And I’m very disgruntled to be here!

PP. Why would they be obsolete, now that we need them more than ever?

PP. You’re not insinuating…This doesn’t affect the Number One countries…Not the U.S. of Airborne Drones?

CP. There are no more countries. Period. Drones or no.

CP. Hear me out… There are no more countries.

CP. Actually that’s a good idea, but out of context here …

CP. There’s only One God Now….

CP. There’s Only One God Now because there’s only One Government.

PP. Are you aware of the gravity of your remark, Ms. Pineda? That could get you 35 in solitary…. 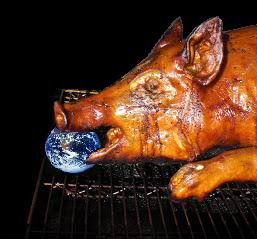 CP. All countries are now obsolete. The neo-cons have seen to that, thank you very much. There’s only One Government Now. It has certain Divisions, like GATT, FTAA, MEFTA, TAFTA, NAFTA, TTIP, TPA, TPP, WAEMU, TIDCA, ECOWAS, TISA  and all the other TIFAs and FTAs, but none of them have flags. They’re just wholly owned subsidiaries. We don’t have countries any more. We have World Government.

PP. Wasn’t that what all your progressives kept yammering about? One World?

CP. Except this one’s a pig-on-a-platter with the planet in its mouth. 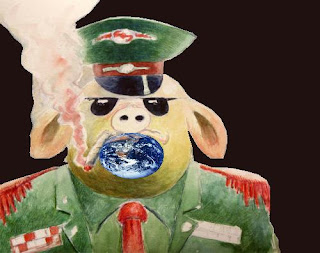 WHAT YOU CAN DO

TO OPPOSE THE TPP and TISA, the mother of all “trade” deals:

Despite 2 million signatures opposing the TPP. Obama has sent the TPP to be shooed in by the lame duck Congress. And the Resident-in-Waiting has appointed Tim Kaine as her prospective vice resident, and Ken Salazar to head her transition team. Read more about this Manchurian crew and their positions on fracking and the TPP.

Meantime, it may be time to chain yourself to a pipeline or bulldozer, or stage a congressional sit in, or take wire cutters to a few chain link fences and spike a tree or two. But if you can’t yet relate to that kind of inconvenience, and you if  you still imagine you live in a representative democracy, the following petition is still current:

Note: This newsletter's position on signing petitions is mixed. Signing petitions may be totally ineffectual, but on the other hand it can't hurt. Or can it? Every time you sign a petition, think what it would look like if you got out in the street and braved your inconvenience threshold to march, hold a sign, holler, lock down a bank or any other non-violent approach?