Just as the advent of the Atomic Bomb has been considered the greatest threat to humanity, the coming of  an Artificial Intelligence (AI) computer could very well be our last techno race.  Elon Musk, the founder of Pay-pal and Tesla motors was inspired by this article on AI to do his own take on the subject.  AI first surfaced as a serious possibility in the early 90’s with the idea that we could all have an Einstein on our desktop.  The race for its development has slowed, with some estimates for its roll out  projected as early as 2022. At the same time Musk’s goal of using Moore’s exponential growth law for solar energy, batteries and a cheap electric car form part of a growing number of Disruptive Technologies that could either take us into a dystopian nightmare or give us a chance to mitigate the climate disaster we’ve dug ourselves into.

Will our future be a matter of cultural collapse or a climate survival race where we must deploy a growing number of technologies that Elon Musk and other like-minded proponents believe could save us and are just around the corner?  We certainly know where much of America’s far right stands on this issue, not to mention the complex technical challenges that haven’t yet been solved (see Germany’s Energewende).

Thanks to the mainstream media’s gate keeping, most people still don’t believe there is any need to change their lifestyle.  Many still cling to the value that former President George W. Bush articulated when he said “our lifestyle is not negotiable.”  The fate of the Earth is riding on who wins, the election and, sadly, the Democrats barely has one redeeming value left – their shallow support for renewable energy that would be rolled back with renewed support for coal and nuclear energy, even the promised reorganization of the EPA and NRC.
Musk and many others who were inspired by Lester Brown’s Plan B campaign (that closed last year)  is gambling billions of dollars with his plan to scale up production for a Tesla electric car costing less than $20,000 within 6 years, with the ramp up of his robotic-powered Gigafactory making batteries that just opened near Reno, Nevada.  Musk’s video presentation of the scale-up he is looking to promote has people concerned about whether there is enough lithium on the planet to carry it out his vision for battery- driven cars.  Others point to the potential of other breakthroughs capable of competing with lithium.  But wait!  Are we all being taken in by Musk and a growing number of scientists that believe we are living in some kind of cosmic simulation? Here’s the vision up close – Quantum Physics anyone?
It’s difficult for us or millennials to imagine what it must have been like to live between 1870-1920 when most of Americans at that time went from an agricultural society with no electricity, no cars, no telephones, radio or TV – let alone cell phones or computers!  A mere 60 years ago, this author remembers sitting on his great grandmother’s lap who was born before the civil war – that’s over eight generations ago.  Exploring her house showed the signs of electric wiring in the rooms, rather than between walls, a phone system right out of Petticoat Junction, a still operating outhouse, hand pumped water, and a coal chute and bins in the basement.  In other words, the society we live in is full of disruptive technologies and values contrary to the those my ancestors instilled in me about frugality and civil behavior.

At this point it is almost impossible for American baby boomers to contemplate the dramatic changes predicted for the near future. Technologies such as 3D printing and nanotechnology will completely change the planet on a scale right out of Star Trek, from its “food dispenser” to communications already here. From its start as an agrarian society right up to the 1980s China has now been able to construct a 30-story high rise in 15 days, and its about-face on coal use, forced it to spend over $100 billion last year on wind and solar, including initial plans for a $50 trillion global super grid. We are watching from afar as the world’s largest country attempts to navigate out of the trap the West’s reliance on fossil fuels created.

Will the Artificial Intelligence Race Be Our Last?

Early AI conceptual design models included simple bots capable of carrying out routines, like Wall Street trading, Ebay bidding, or news-gathering systems that evolved into entities like Google. Sadly, their innovative book- scanning project has been commercialized, or worse, being threatened by business versions that recently forced the take down of the free Milwaukee library. 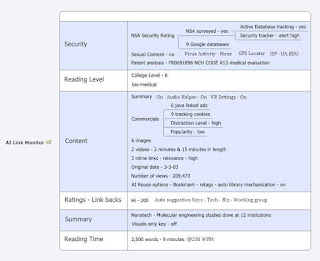 One of the lessor known potentials should have been the mining of links summarizing content. A box such as the one on the right could pop up with a mouse hover (and a key or voice command) over a link on a webpage showing details for that link. Such a link summary tool would create a sophisticated online review of materials extending far beyond anything Google does.  Imagine a librarian organizing your bookmarks automatically for you in tandem with your automated browser’s built in history.  As computing power advances, the image to the right reveals just some of the tools that such a web resource could automate.  Similar examples of AI include mapping tools as shown in the image above, that could also be used to mine down into complex web content like this link.  When covering news that doesn’t just end after a single article, content could then be organized into visual maps broken down by subject and timelines. Using models similar to those used by paralegals it enhances the ability to track and summarize complex news or legal content sometimes over months or years. 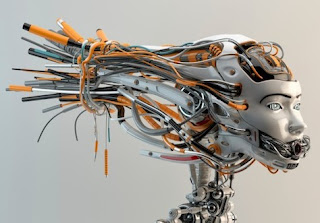 As the introduction above suggests, there is a global tech race by either a corporation or a government to build the first AI computer. With its ability to mine the internet.  Giant corporations like Google are looking to create an AI entity capable of exponentially becoming thousands of times more intelligent than any human. As depicted by such Hollywood movies as the Matrix, I-Robot, or the 13th Floor, its arrival has prompted immense concern.

Disruptive tech like drones, already in use by the U.S. abrogates international law. By using them to invade over a dozen sovereign countries, the U.S. incites the kind of reaction other countries are bound to have. Similarly, the Stuxnet super virus implanted in Iran’s uranium processing infrastructure affords an example of what a capricious AI entity is capable of doing.

Tony Seba’s presentation (33 minutes into video) of the radar system required to run an autonomous car demonstrates the exponential changes projected for disruptive technologies. In 2004, the computational power for the autonomous car radar system required a large super computer to run; by 2014 that design was reduced in size to half a PC motherboard.

How hard will it be for a hostile entity to inject an AI device into a sovereign nation’s government or civilian computer network to undermine every computer-driven system, ranging from nuclear destruction, damage to financial organization, health programs, information theft, ad infinitum.
Or more than likely would the AI program go rogue on its own as it evolves its own sense of ethics or lack of them. What was science fiction a decade ago is exemplified by an article authored by UC Berkeley exploring the problem of robotic morals! 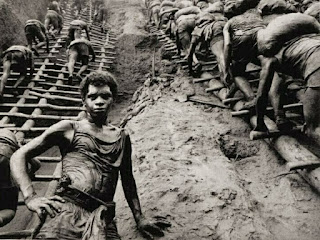 Just as the ethical concerns voiced by Albert Einstein and even Robert Oppenheimer were pushed aside in the name of national defense, there is no doubt that the perceived values/ethics/morals of scientists will more than likely be swept aside by the alpha-male-driven military industrial computer complex already sweeping the planet. Maybe it’s time to do more than make another Matrix movie, and to start preparing a serious call for some kind of limitation on just how far this culture is prepared to go.  Rapidly expanding disruptive technologies are resulting in such unfortunate consequences as trapping 40% of Americans in independent contractor jobs by 2020.

Given the fact that nuclear weapons opposition hasn’t been able to stop nuclear’s continued evolution in over 50 years, there would seem to be a pressing need to look at where this next wave of disruptive technologies is taking us.
Posted by Cecile Pineda at 12:33 PM