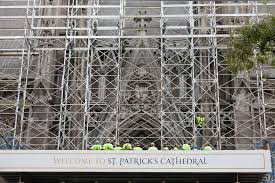 The confrontation at Standing Rock intensified this week. The Army Corps of Engineers has unilaterally declared that the Sacred Stone camp will be cleared as of December 5. They seem to overlook the fact that this is Sioux land as David Archambault II, Sioux Tribal Chairman, has reminded us.


At the same time, a caravan of over 1,000 Iraqi Veterans Against the War is setting out from all over the United States to stand with First Nations People at Standing Rock. Donate to their go-fund me campaign for travel expenses.


David Lindorff writes for Information Clearing House, re-printed in Popular Resistance:
“It’s time for all decent Americans to take a stand in support of the Sioux People of Standing Rock. Contact the White House at 202-456-1414 and demand that the Resident send troops to stand between Sioux water protectors and their local law enforcement assailants, and to have Federal Marshalls arrest those who commit acts of brutality. [AND please sign the petition.]

“The militarized response to peaceful protest at Standing Rock should stand as a warning to all who would protest America’s slide into totalitarianism. What the government will do to Native Americans and their Anglo supporters today is what we can probably expect them to do to any of us who protest in this…Trumpian America.”

In fact the current Resident managed to visit Standing Rock, but in 2014, where he shed crocodile tears about the U.S. government‘s centuries of abuse of native peoples, but now that the true lines of power have been brutally exposed, this Resident has been quoted as saying, let’s just see how things play out.

The media meanwhile continues to spin the bankers’/petro-oligarchs' story, but any reference to riots and thugs truthfully needs to be laid at the door of “law” enforcement, because Standing Rock has in fact become a magnet for volunteers eager to participate in yet another American Indian War. 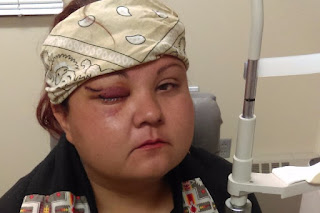 Last week, we ran a photograph of a severely wounded, but unnamed woman. She is 13-year-old Vanessa (Sioux Z), who has suffered a detached retina from a “law” enforcement projectile hurled at her. You can go fund her retinal re-attachment.

Even more severely injured (by a concussion grenade, legally required never to be aimed at personnel, civilian or otherwise) has shattered the elbow of Sophia Wilansky, with injury to bone, nerve and muscle.  Currently Sophia is hospitalized in Chicago where doctors are performing repeated surgeries, attempting to save her arm. Send donations to her go-fund-me campaign.


Meantime, the mound across the river, a Sioux sacred site and burial ground was being encircled with razor wire yesterday by employees of Energy Transfer Partners while a long shot shows other personnel standing on top of the burial grounds.

Imagine—for one shocking moment—a quick direct action by New York State’s Iroquois Confederacy (the folks who gave us language for our own “Constitution”) stringing razor wire around Saint Patrick’s Cathedral, and riding horses into the sanctuary. Some people don’t need to build stone cathedrals because the Earth’s magnificence is Cathedral enough. This is a time to listen to what they have to say. It’s time to abandon confrontational ways of thinking—and lay down lethal arms if life on the Planet is to survive.

Cecile Pineda touches on issues of displacement, personal, environmental and cultural, as she talks about 40 years of the writing life, the breakthroughs, the discouragements, and the daily practice. She will read and sign copies of Three Tides: Writing at the Edge of Being. Time will be set aside for questions and answers.  Pineda is widely recognized as the winner of the Gold Medal from the California Commonwealth Club and nominee for the 2015 Neustadt International Prize.
Posted by Cecile Pineda at 12:05 PM