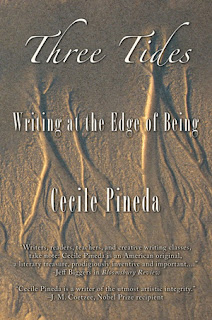 Where you were when Kennedy was shot?

People born in the U.S. have been accumulating leading questions for some time. Now, thanks to a sensationalist media, we have a third: Where were you when you heard Mr. Trump in all his vulgarian vainglory was to be inaugurated as the 45th Resident of the White(wash) House.

I was greeting the pre-dawn Nevada desert sky in a prayer circle led by a Western Shoshone Chief who chanted prayers to Mother Earth, to the sky, to the water, to the Earth and to the fire. I was there along with some 15 (the number varied as the week progressed) other people committed to ending the terrorism of drone warfare, of targeted assassinations originating in the White(wash) House every Tuesday morning when the current Resident signs off on the “Kill List,” which includes mostly Arabic names of people unknown to him, many of them  innocent and non-combatants, people who are someone’s son or daughter, someone’s father or mother or good friend, most of them by- standers, who once they are good and dismembered, the U.S. identifies as enemy combatants (but they have to be good and dead to achieve this elevated distinction). And to stop the “double-tapping” of those deeply humanitarian people who rush to aid the fatally wounded and dying only to be dismembered for their efforts.

All week, we activists protested drone warfare at Creech Air Force Base. We held our banners over the highway as the drone pilots and support personnel entered the base from 6 AM on, and in the afternoons when they left for home after a good day of death-dealing. We staged two extremely successful actions, sustained five arrests, and multiple roughing up and handcuffing. Full reports will appear in my next newsletter. Meanwhile, pictures are worth a thousand words. Our most spectacular action: we carried a 20 foot wide banner reading: SHUT DOWN CREECH, held by five people risking arrest, moving toward the gate towards a lineup of Las Vegas municipal police and base MPs. We prepared and mic checked our own order to disperse, coopting their own language:

As global citizens we are part of the International Peace Patrol. Creech AFB, through its participation in the U.S. drone assassination program, is in direct violation of the United Nations Declaration of Human Rights, articles 3, 7 and 10 [to which the U.S. is a signatory]. As an active member of the U.S. Air Force, your duties indirectly support the illegal activities taking place on this base. Therefore you are complicit in the crimes against humanity being committed here. 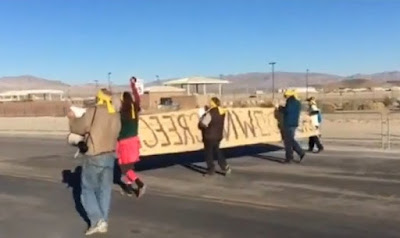 As global citizens, we order you to disperse immediately and to stop helping the illegal drone program to continue. If you fail to comply with the order to disperse, you will be trespassing against the human rights of the people of Afghanistan, Iraq, Syria, Yemen, Pakistan, Libya and Somalia who are victimized by U.S. drones. Therefore I order you to disperse. 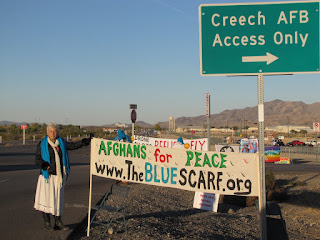 (After repeated readings of the above statement while counting down,  the final statement was added): Since you have all failed to disperse, we are compelled to make a citizen’s arrest of the commander in charge of Creech AFB. At the top of the chain of command, Colonel Case Cunningham has the highest responsibility to ensure that all international laws are being upheld. We call on all personnel at Creech AFB to either stand down, or to assist us, in making this arrest to protect the global community.

The Things That Matter

Circling the fire pit with the Shoshone Chief, we were reminded that a different world exists, a world from before “Contact,” a world before the White Man set his annihilating foot on this continent, where people who inhabited this landscape understood a little better how to take care of Her. It is a world that still exists. 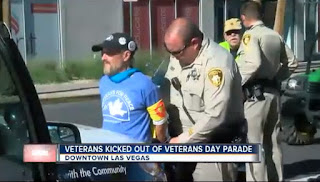 Each morning last week, for a little while, we were invited by the Chief to re-enter that world, to greet the dawn with prayers, dancing and chants in the Chief's native tongue. To visualize the vast expanse of desert surrounded by majestic mountain ranges to the east, south, west, and north, lit only by the moon and starlight of 4 AM, stars as thickly scattered as sand on the shores, slowly extinguished one by one by the dawning of first light, the sky lightening to the crowing of the resident rooster, its faint blue light yielding to yellow, then to a faint blush of rose, the sun rising at last and against its blinding first rays, and as the Chief drummed and chanted, two doves alighting on the utility pole directly in the sun’s face and making love; to give thanks for the blue of distant mountains to the east, and to the growing blush of mountains to the west, to be reminded that each day lived on Earth is a blessing for us to bless, this it seems to me is what matters. Such a world is still possible if humans rediscover how to make it so.

We have been traumatized by months of unpardonable vulgarity, hubris, hatred, rabble-rousing, all amplified to a roar by a complicit media, numbing our minds with the relentless blaring of the TV, our wits dulled by more than a century of the dumbed down “free” education mandated by the State in order to socially engineer an ignorant, uncritical citizenry more easily fooled and controlled.  We see the result. The new Residential phenomenon is NO ACCIDENT. It results from a relentless barrage of empty television noise, the product of a political class bent on collaboration with the banker and corporate class striving to amass billions at the expense of our national infrastructure and the citizenry it purports to represent.

My own sense was that Trump would be declared the “winner,” with the aid of caging and by cross checking voters’ names (mostly poor and people of color) off the rolls, and that regardless of who might “win,” there would be activity and mayhem in the streets. But when the next four years draw to a close, we will see the very people who voted for Mr. Trump feeling betrayed and disillusioned by a man who, regardless of this words, has never had any intention at heart of coming to the aid of the disaffected, and who has the attention span of a cockroach. Meantime, he will have done his damage, become complicit in the suffering and deaths of millions of war victims, millions of deportees, ripped apart from their families, many of them sent back to the starvation and death squads they came here hoping to avoid.

This world is not a sane one, Trump or otherwise, and to expect sanity to emerge from it strikes me as nothing short of delusional. The mission of this country has become the suffering of millions.

What is Left After the Wreckage?

Although the State is powerless to change, it is a mistake to think that the people themselves are without power. We have the power of imagination, the ability to visualize another world and the will and energy to create it, locally, enclave by enclave, tribe by tribe, refusing to acknowledge defeat, strengthened all the more by this new challenge and by the evidence of history. Nowhere on Earth have a people ever been tyrannized by an unjust regime without resistance and revolt.

We are all in for interesting times. We can join hands around Lake Merritt in Oakland, but these are symbolic gestures. They will encourage people, and remind them of solidarity based on the love existing in their hearts, but we are now faced with an extreme challenge.  Careful analysis is necessary, responsible leadership needs to emerge, a leadership endowed with vision, restraint, and fierce integrity.

Where will it originate?

Posted by Cecile Pineda at 6:31 PM