Cecile Pineda touches on issues of displacement, personal, environmental and cultural, as she talks about 40 years of the writing life, the breakthroughs, the discouragements, and the daily practice. She will read and sign copies of Three Tides: Writing at the Edge of Being. Time will be set aside for questions and answers.  Pineda is widely recognized as the winner of the Gold Medal from the California Commonwealth Club and nominee for the 2015 Neustadt International Prize.

Why is that year of any significance whatsoever? Any takers?

That’s right! That’s when the West decided it needed another planet. James Watt was not an especially brilliant man, certainly not a philosopher. In fact, there are probably lots of plumbers now living who are much more philosophically inclined than James Watt.

Before 1746, the arctic snows were white, the glaciers were white. They showed that same dangerous turquoise blue going to cobalt they show now, but no soot covered them. They were still clean because no one needed to burn coal.

All that stopped with the steam engine and the industrial revolution, and by the time Augustin Mouchot came along with his Solar Heat in 1846 (one hundred years later) the economy of the West was rooted firmly in coal, and no one paid him any mind. Certainly no one was thinking how all that human activity, driving cars, churning out weapons of war, manufacturing products designed to fill the ravening appetites of people who suddenly discovered how deprived they were, would undermine the glaciers, how warming waters would flush them down into the seas for their final melt.

And no one that I can tell—except folks who live in the arctic—realizes it now. Which is why as I pedal my exercise bike every morning in the gym (where that energy could be harvested, if someone thought of it) I can look at the relentlessly speeding traffic shooting along the elevated highway whose footings are sunk deep into earthquake-vulnerable soils, punctuated every ten minutes by a 10- sometimes 15-car long BART train.

We can’t afford to live here anymore. We need an economy-sized planet now, eight times the size of our own asphyxiating Gaia. Which means a planet with a 192-hour-long day, with 96 hours of straight daylight on average, and 96 hours on average— of night.

We can’t afford to live here anymore. In the region of California I call home, I live in a 9-story concrete slab unretrofitted building. Its footings rest on a cut off tennis-ball section of concrete designed to rock when significant earth movements occur. It had better rock, because the buried creek that runs down the street (and which in water-parched California could be captured in a cistern—a cistern which doesn’t exist)  may have liquefied the soils. 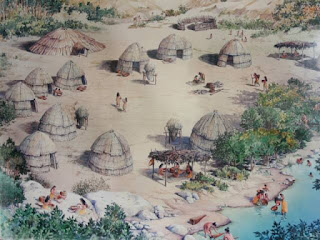 The Ohlone people who had to be massacred before the West could steal their land, built huts of bound reeds which swayed and rocked with earth movements but did not  fall on them and crush them. But other folks took over who knew best how to procreate and satisfy their housing needs. Retrofitting a grass hut doesn’t require much in the way of an outlay, but retrofitting a 9-story concrete slab structure requires a different magnitude of expense, necessary if people (who can’t afford it) insist on living in earthquake country while building concrete slab high rises.

With the level of human expertise and technological knowhow existing now, why doesn’t someone come up with a way of retrofitting Gaia, clamping her unruly soils in a vise-like grip to discourage her from turning over in her sleep? With all that technological know how, surely someone can come up with an oxygen tent large enough to purify her asphyxiating air. Surely with all that technological expertise someone’s going to come up soon with the air conditioning system to produce a new ice age.

Then everyone on Gaia gets a chance to revisit arrogance a second time.

WHAT YOU CAN DO

When the Trump gargoyle cabinet and the UK parliament shirks its climate-sustaining obligations we need to take citizen action.

3. Turn off the lights, lower the thermostat. consider wearing sweaters.

5. Turn off your computer 10 hours a day and all night.

6. Throw out your TV. Anyway, it’s turning your brain to cottage cheese.

8. Avoid eating beef.  All those cow farts add up to multiple smoke stacks.

All the above require significant life changes.

To assert your exemption from life changes, the following won’t cost you undue inconvenience:

3. Resist fossil fuel pipelines and similar infrastructure. Visit an indigenous community near you to introduce yourself to a different way of seeing things.

4. Put some muscle and money behind climate organizations and media.