THE GOOD NEWS THIS WEEK:


We have our brave new coup to thank. It has finally woken the American sleepwalking public to political reality, a reality that has overtaken us more than 46 years ago. The only difference is that now, even the blind can see. Our resistance is late; we should have been in the streets 46 years ago. But—as they say—better late…..

Planned parenthood not going away any time soon.

Why Betsy Can’t go to school.

Dems Take Aim at hedge funds. Slap them with a tax increase.

Courts have travel bans in a chokehold.

Governing a large country is like frying small fish. Too much poking spoils the meat.
—Lao Tse

Trump’s  Corporate Enabler:  The Media & How to Deal with It

Twenty days after the arrival of our very own Big Daddy-T-bagger, a substantial portion of the corporate media's normalization agenda is rolling out and confronting us. The big question is how much of the “Swamp” will it succeed in draining and how can it be countered? And what can we do about it?
In view of most of the major issues this country faces, we must confront the fact that role of the corporate media is to legitimize Big Daddy T and the elites set to control our two party duopoly.
Oscar Wilde wrote:
In old days men had the rack. Now they have the Press. That is an improvement certainly. But still it is very bad, and wrong, and demoralizing. Somebody — was it Burke? — called journalism the fourth estate. That was true at the time no doubt. But at the present moment it is the only estate. It has eaten up the other three. The Lords Temporal say nothing, the Lords Spiritual have nothing to say, and the House of Commons has nothing to say and says it. We are dominated by Journalism.[source|
On the one hand, we might do well not to underestimate the current danger we face if it’s anything like what the authoritarian regime did to the secular media in Turkey after the 2016 coup as reported in this two part piece (Part I) - (Part II).  On the other hand, we could be facing a very different world if Big Daddy rips apart the internet and Network Neutrality, or the big media players try pulling off a sacrificial lamb attack like the Washington Post tried to do around Fake News. In themselves, these two events could launch a new level of oppression or result in a far bigger tent of ?neocon? allies. The question is how to sort out the media’s fake claim of “fair and balanced” vs. the unawareness—so far — of most people in this country as to  our present state of affairs, since so few of them are able to identify  the media as the single biggest lobbyist in D.C., a lobby that has long been against any attempt at election reform. 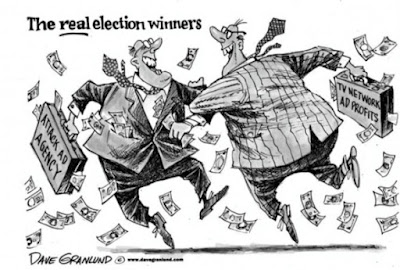 And why? Because the media make enormous sums from every election cycle, and they have no interest in reforming the way things operate.
For example, the media has routinely shown its power to distort perfectly legitimate protest, alienating public sympathy by foregrounding violence. And incidentally, particularly at this time, the Black Block issue should be resolved.  From U.C. To D.C., its subculture and violent public tactics must be addressed before the media manage to parlay them into a tragedy that will affect us all.
We have an urgent need to better understand and counter the media's unfair biases, less it assist this administration in avoiding coverage of any major issues from human rights, climate, environment, labor to local and international militarism
Bill Moyer's Movement Action Plan or the Eight Stages for a Successful Movement, offer an important tool, depending on the level of public awareness and support behind an issue, to help us determine what kind of tactics are appropriate.
We need to counter corporate media's use of polls and focus groups as instruments of citizen manipulation, not so much with protest but with town hall forums and people-to-people organizing, online at home, or face-to-face. At the same time, if  the internet is still left to us as an organizing tool, we had better start understanding that the only global “one-to-many” news broadcasting tool we have is twitter – and we had better know how to use it to organize critical information and to put  our own set of news channels in place. 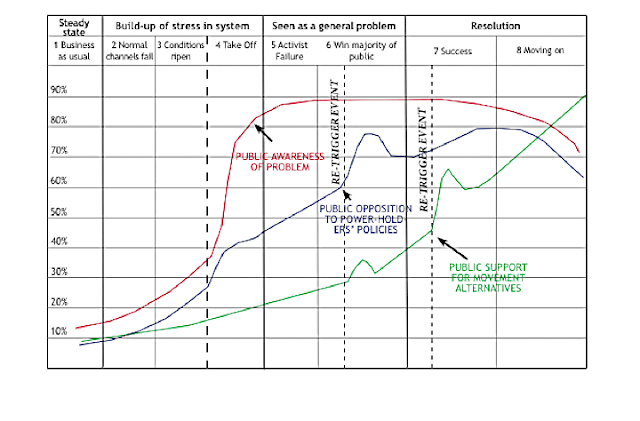 Posted by Cecile Pineda at 8:14 PM