"This Way To The Starting Gate, Ladies And Gentlemen"

When I first passed through a security barrier after 9-11, what I saw overwhelmed me with feelings of horror and disbelief.  “Do you know what you’re doing?” I kept asking everyone in particular, forgetting that the “what” needed to have a context, and that the people I was attempting to talk to had no awareness of Third Reich history following the Reichstag Fire.

Fast forward to my return to Oakland through the Los Angeles airport this week. (The LA airport, referred to as Lax has recently suffered a make-over to the tune of $509.8 million. Just two gender neutral one-seater bathrooms serve the swelling crowds. The wait line Tuesday morning consists of nine people, their faces screwed up in varying degrees of anxiety. Tip to LAX travellers: allow 20 minutes to attend to bodily needs.)

As a matter of conviction, I have made a habit of refusing to pass through Michael Chertoff’s full body scanners, devices that have made Mr. Chertoff a millionaire, in favor of a pat down conducted in full view of the public. I do this to call attention to what invading the privacy of a 84-year-old woman looks like (which is why I refuse the oxymoronic “private screening.”) 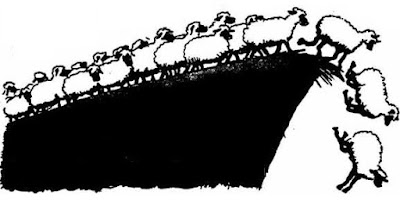 This time around, repeated shouts by TSA personnel for a “female assist” go unanswered. (“Female assist” is the operative term for the soft porn practice by the T&A of the female pat down.) During my ten-minute wait for female “assistance,” I have the benefit of standing at the frontlines where the sheepization of the American traveling public gets reinforced. Some 500 people are waiting to penetrate the “security” veil, one by one.  Constant shouts over the din of the crowd caution people to empty their pockets, remove their hats, and strip their feet of shoes.  So divested, they file docilely forward, all of them barefoot. A small child screams hysterically, in full tantrum mode, flinging her shoes out of her stroller, acting out this environment’s energy. Her mother is warned to extract both her children from the stroller (a likely repository for volatile substances) which must be passed childless, through the barrier by a stolid-faced attendant. The woman hoists one strollerless child onto her hip, grabs the tantrumee by the arm, yanks her up off the floor to haul her, still kicking and screaming, through the security barrier.

Is something wrong with this picture?

I decide to change my waiting to proactive. I block the line waiting obediently for the voyeurism of the full body scanner, making it clear I intend to maintain my stance until the promised “female assist” makes her appearance. Despite my maneuver, another few minutes elapse. At last, I cup my hands, shout through the security barrier “female assist!”

“Are you talking to me?” a “male assist” inquires from beyond the barrier.

“I didn’t think I was talking,” I wisecrack.

Shortly thereafter the promised “female assist” arrives, ushers me through the gate. Tantalizingly she describes all the assistance she intends rendering me. Directed by her litany, I spread my arms, I spread my legs. She indicates she will run her hands under my waist band, front and back. She executes her tasks with conviction, her strokes vigorous enough to dislodge my slacks from my waistline. At last she delivers the promised back and forth over my crotch. (Whereas formerly the hands were passed downward in a swift and I like to imagine embarrassed motion, this new development is intended for further customer satisfaction.) This time her hand gestures are aggressively suggestive.

“Do you have something there?” She eyes me suspiciously.

I restrain myself from using a street expression for the female genitalia. Instead I settle for, “You bet!”

My remark releases the Errinys. A supervisor strolls over. “Ma’am? Ma’am, we have to do the pat down all over again.” She begins repeating the ritual, top to bottom. I demand an explanation.

“Ma’am, you were making sarcastic remarks.” she explains.

“Sarcastic remarks are now against the law?”

“Ma’am, ma’am,” she bleats with all the assurance of an enraged school marm. “I’ll have to call my supervisor.”

Bemused, an eleven-year-old boy watches the proceedings. I want to say, “Young man, take a good look at this. Remember this.” But from the time he began remembering, his years tell him that walking through the security barrier into the maw of Michael Chertoff’s radiation-producing full-body scanner requires bare feet. My years conjure images of Jews stripped naked, waiting expectantly to enter the crematoria, of people being told they are lining up for the showers, only to discover that the soap that has been issued to each one of them is really just a stone.


This Week’s Roses Amidst the Thorns

How to send a politician packing: Protests in London over Grenfell fire force PM Theresa May to flee.

France declares all new rooftops must either be topped with plants or solar panels.

Ten percent (10%) of US energy in March was supplied by wind and solar, setting a record.

Backers of the dam opposed by Berta Cåaceres withdraw their funding completely.

211 city mayors and 10 state governors commit to uphold the terms of the Paris Accord.

Minnesota is the fourth state to support the Paris Agreement, joining Washington, California and New York.

Kansas rolls back Trumptype tax cuts for the wealthy because it devastated the state’s treasury.

Seeking Economic justice for all, Hawaii becomes first state to consider basic income.
To raise awareness of an unjust bail system, communities bail fathers and others out for father’s day.

Delaware enshrines abortion rights, even if Roe/Wade gets overturned.

Women in Missouri, Ohio, and Texas, get creative protesting repeal of Obama Care.

Standing Rock Sioux receive $250,000 Henry A. Wallace award for its courage opposing the DAPL, plus up to $1 million from the Wallace Global Fund to transition toward fossil fuel independence.

What You Can Do: