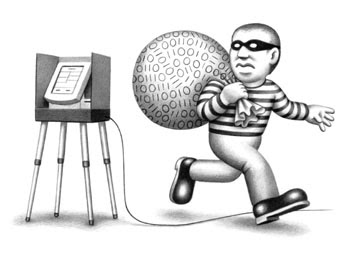 1. Gerrymander the district to make sure your candidate holds onto it. That’s for starters.

2. Make sure your registrar of voters loses any voter registration forms submitted by undesirables: black or dark brown, Koreans, hijabis, turbanites, and immigrants, even if they try showing you their papers.

3. If any one comes whining about why those names don’t show on the voter rolls, shrug. Like you have no idea what they’re talking about.

4. If someone complains and winds up producing Xeroxes of the originals, slap them with a felony charge.

5. Any undesirables that slip in, zap them with crosscheck. Try matching their names as close as possible with your list of double voters. If they’re in another state, so what. You got the list. Let it do the work for you.

6. Zero in on voter registration projects early in the game. Send large men in to raid their store front, nab their computers, cut off their juice. Run them shitless out of town. Leave a for rent sign in the window. File a criminal complaint against them (you can always dismiss the charges once they’re out of business).

7. If some reporter comes around throwing questions at your candidate, send in the big guys and rough him up a little. Rabbit punches don’t show up.

8. If they still don’t get the message, shut them up for good.
USA  USA  USA   USA.
It works good every time.

9. Remember the guy who slapped your crosscheck list together is a shoo-in for the Voter Integrity Commission.

Disclaimer:  These particular guidelines were developed in the Republic of Georgia, not the one whose capital is Tbilisi, Atlanta, Georgia, part of the world’s greatest Democracy, home of the Free World and the most expensive elections ($55 million) in the world!

Bring Your Friends And Neighbors Too!

1) Send your comments to the Council before 5:29 pm  Monday!

You don’t have to attend the meeting in person to make sure your voice is heard!! Go here to make comments and fill out the requested fields for the 6/26 City Council meeting (Item 13). You will stand with the mass of folks who have been pushing the council to #DefundOPD and #InvestInCommunity (Note that written comment closes at 5:29 pm on 6/26, so make sure to do this earlier.)

Oakland is able to pass budgets that do not serve the people because its councilmembers say one thing and do another. Let them know that we are watching! We are encouraging Oakland residents to watch the budget meeting online or at watch parties throughout the city. What sounds like more fun than listening to Lynnette McElhaney over dinner!?

•We have a Defund Thunderclap set to
mass-Tweet/Facebook/Tumblr from supporters' accounts at 9 am on 6/26 IF we get 100 supporters.

•Please visit here to support and share from your accounts. We need everyone to use ALL of your social media accounts (Facebook, Twitter, Tumblr) to support the Thunderclap because they count individually.

•The final mass message takes people to this list of requests (submit written comment, #DefundOPD sign campaign, watch parties and link to stream the meeting) to put the pressure on City Council ALL DAY before Monday's meeting:

MAKE YOUR OWN SIGNS

•Take a picture with your sign and post it to your social media accounts (facebook, twitter, instagram)
• Include the hashtags #DefundOPD and #oakmtg and a link to these instructions: www.defundopd.org/memo
•Tag at least one Oakland Councilmember (see below)
•Tag some friends to ask them to take their own picture and help spread this campaign!r
e Info:
More Information:
Some examples of posts you can make

Posted by Cecile Pineda at 3:26 PM