Extreme Policing In The Era of Trumpocracy

Voting on a long-delayed and highly controversial agenda item centering on the City of Berkeley’s contract with Urban Shield, a Homeland  Security-affiliated program of militarizing the nation’s streets, finally came to the vote the evening of Tuesday, June 20 in a location, Longfellow Middle School, deliberately chosen because it could hold the 500 folx who showed up.

From the start of the evening, tensions were high.  Hundreds of Berkeley citizens had expected to make their voices heard last month at the council meeting originally designated to include this item on its agenda but after the meeting dragged on till the wee hours of the morning the item was postponed. 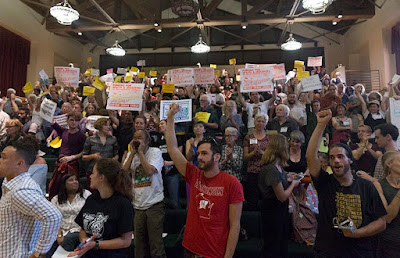 On June 20, the council—and the public—came fully prepared.  The agenda included three issues: Would the City of Berkeley continue or sever its contract with Urban Shield; would the City continue its relationship with the Northern California Regional Intelligence Center (NCRIC) and would the City purchase a bullet-proof armored personnel carrier at a cost to Berkeley of $80,000 funded at a cost of another $125,000 by the Department of Homeland Security (in possible anticipation of a huge wave of civil unrest.) 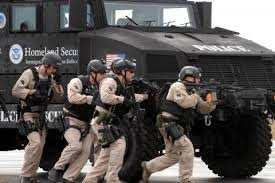 “Alameda County Sheriff Ahern’s 10-year-old police militarization extravaganza, Urban Shield, combines an assault weapon and surveillance technology vendor expo with practice skits in a variety of assaults engineered by narco-terrorists, eco-terrorists, anarcho-terrorists and a plethora of unhappy people of Middle Eastern descent, most of whom are shot dead with large assault weapons,” writes Tracy Rosenberg for Berkeleyside. “This is interrupted by shopping for the latest T-shirt declaring that “Black Rifles Matter” (instead of Black Lives Matter). The expo sucks up millions of dollars in federal grants leaving virtually nothing left over for public health and emergency preparedness, and factually defunding existing emergency programs like CERT and CARD — much as the 2003 absorption of FEMA into the Department of Homeland Security exacerbated the disastrous Hurricane Katrina response in Louisiana in 2005. 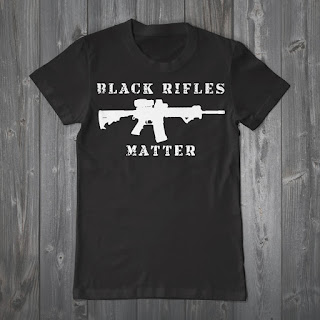 “Berkeley’s deputization of police officers as “Terrorism Liaison Officers” under the fusion center agreement with the Northern CA Regional Intelligence Center (NCRIC) places local cops under the direct supervision of the FBI’s Joint Terrorism Task Force (JTTF)As stated:“TLOs shall not independently investigate tips or leads unless directed to do so by the proper authorities i.e. Federal Bureau of Investigation (FBI), Joint Terrorism Task Force (JTTF), Fusion Center, etc.” This implies municipal police cooperation with ICE in what has officially been declared a sanctuary city.


After pointing out that U.S. fire practice targets during the Vietnam war showing Asian features morphed into those showing Middle-east figures, one witness, Iraq war veteran Scott Kimball stated: “Those weapons and tactics are used to kill people. They are not going to make our community safer.” Meanwhile, in an apparently unrelated event, the NRA is circulating a video apparently calling for armed resistance to what’s characterized as the “liberal agenda.”

Had the June 20 agenda been calculated to infuriate all those in attendance, it could not have been designed more skillfully. Presumably “progressive” Berkeley Mayor, Jesse Arreguin, who incidentally is one of the members of the U.S. Conference of Mayors, allowed the Police 40 minutes of uninterrupted time to present their power point assisted case in support of Berkeley’s continued contract with Urban Shield. Their testimony suggested that without maintaining the contract, emergency assistance should Berkeley require it, would not be forthcoming, an innuendo amounting to subtle blackmail. In contrast, the 500 people, most of whom had come to oppose the continuation of the contract were allowed only 1 minute each to present their case. Their testimony took up 4 hours.

The vote to continue the contract took place after midnight. Evidence seems to  suggest that the decision had been taken before the meeting even began., and that allowing 4 hours of testimony had been a mere pro forma exercise.  As a tactic for disrespecting those present, the mayor’s gesture could not have been more pointed. Following the announcement of the vote results, the outraged but non-violent audience mounted the stage and unfurled their huge banner, prompting the Council to call in the cops.

But what ensued proved beyond any doubt exactly what the citizens of Berkeley could expect with Urban Shield: To quote Peter Woiwode writing for Berkeleyside: “Berkeley Police beat, pushed and battered over 200 peaceful protesters late last night, bloodying at least two and arresting two more. With fear and anger written across their faces, dozens of officers struck elderly people with batons, targeted trans people and people of color, drove recklessly into peaceful crowds, and escalated a peaceful protest into a violent, chaotic mess….The myth of how non-violent Urban Shield was, was over.” 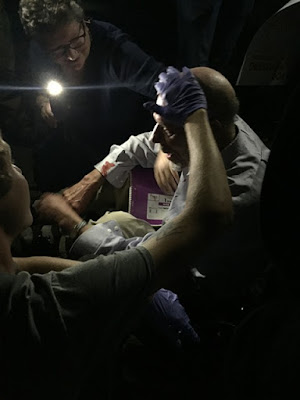 man bleeds from head wound
after police baton hits him

Natalie Orenstein writing for Berkeleyside, states that, “Organizers are demanding a re-vote on Berkeley’s participation in Urban Shield. Represented by the Oakland law firm Siegel & Yee, they are alleging that the City Council violated the Brown Act by privately discussing the vote before the meeting, voting on an unclear amendment to the original item and holding a vote that was not publicly audible amid disruption. The firm has sent Zach Cowan, the city attorney, a “Cure and Correct” notice, demanding a re-vote within 30 days.”

Meantime the U.S. Council of Mayors recently passed a resolution denouncing Trump’s allocation of  $54 billion additional dollars to the Pentagon, and calling for demilitarizing the nation’s streets and reallocating funds to anti-poverty and environmental programs.

We wonder where supposedly “progressive” Mayor Arreguin was when that vote was counted. 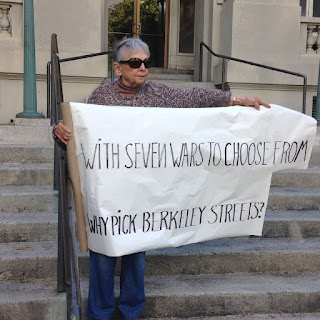 What You Can Do.

Sign if you live in Berkeley, and  please consider passing on to others living in Berkeley.

A Few American Beauty Roses Amidst This Week’s Thorns

U.S. Conference of mayors calls for reversing the Trump re-allocation of $54 billion away from the Pentagon and back where it belongs relieving poverty and supporting environmental needs.

The South Korean Government will halt construction on two nuclear reactors in order to hold a citizen jury survey of public opinion whether to abandon the project altogether.

Cup is only half full as Supremes reject all but family and organization-related aspects of the Trumpvel ban.

Judge Mark Goldsmith temporarily halts deportation of more than 1400 Iraqi nationals, most of them members of the Chaldean  minority who would face either persecution or death if repatriated.

U.S. Conference of Mayors back 100% renewables, vowing to fill climate leadership void, in reaction foreseen by this newsletter.

And—hold your breath—after 16 years of trying, Barbara Lee got her bill to end military authorization backed by the House Appropriations Committee.