TRICKLE DOWN, TRICKLE UP

The Trump carnival earned its latest booby award with the announcement of US withdrawal from the Paris Climate Agreement.  But “it’s an ill wind blows no one good,” as the saying has it. A good example is the trickle down economics practiced by the present regime. The world is up in arms and outrage, but consider: so far the carnival has awakened people like nothing before ever could. Why would another moronic gesture not elicit the same reaction?

Ken Ward writing for TheHill.com underscores that Paris is an agreement with no teeth, and as such a fig leaf “offering political cover to those who would soft-pedal the runaway climate crisis a while longer.” Ward is a valve turner who goes on trial
next week on felony charges for shutting down an oil sands pipeline. He has this to say: “Pulling out of Paris takes false hopes off the table, and opens the way for building an effective climate movement.”

Even before the announcement, Exxon-Mobile shareholders voted to require the company to report the impacts of climate change on its threatened business. Sixty-two percent of them demanded Exxon produce an annual report that explains how the company will be affected by global efforts to reduce greenhouse gas emissions, and by reduced fuel use. This may very well be but one reflection that American voters favor remaining  in the Paris Agreement 5 to 1. That figure has to include some Trump voters.

Within hours of the Trumpet’s announcement, three states, New York, California and Washington, representing over one-fifth of U.S. Gross Domestic Product, announced they are committed to achieving the U.S. goal of reducing emissions 26-28 percent from 2005 levels and meeting or exceeding the targets of the federal Clean Power Plan. New York Governor Andrew Cuomo, California Governor Edmund G. Brown Jr., and Washington State Governor Jay Inslee announced the formation of the United States Climate Alliance, a coalition that will convene U.S. states committed to upholding the Paris Climate Agreement and taking aggressive action on climate change. It’s clear, at least to this writer, that much more good will come from Trumpomania, than if  the US had announced its support of Paris.

Read background on the traditional obfuscatory US position in re: climate agreements. 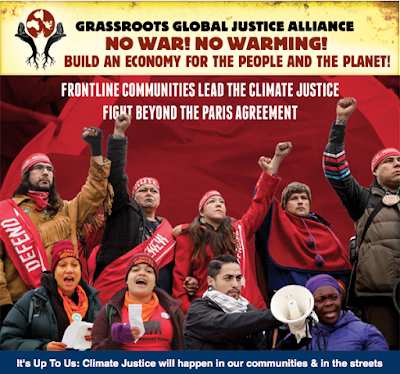 What you can do: Donate.

Unfortunately, this trickle down effect comes with a reverse osmotic trickle up effect from the regime’s swamp: Hate. Mentally disturbed Jeremy Christian managed to stab three passengers aboard a Portland commuter train when they came to the defense of two apparently Moslem young women Christian was harassing. One of them, Micah Fletcher survived. A poet, he posted this poem:

What you can do: Act Up Against Hate! 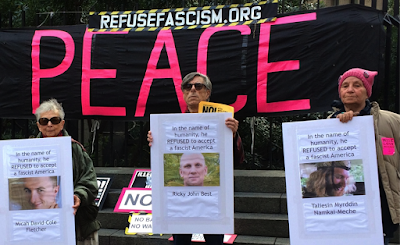 This Fortnight’s Roses Among The Thorns:

NY AG Eric Schneiderman rules Exxon will have to turn over documents indicating what they knew about global warming and when they knew it.

Although the fight is far from over, a federal appeals court affirmed the suspension of Trump’s Muslim ban on grounds of religious intolerance, animus and discrimination.

Nevada’s Assembly votes 38 to 2 to pass AB 405 to bring back rooftop solar; another Bill 406 also passed setting Nevada toward 50% renewables by 2030.

Veterans are training to “re-deploy” to own communities to defend against Trump’s attacks.