BEEN THERE, DONE THAT: U.S. Piracy in Latin and Central America

A nation built on greed is not a nation; it is just a legal framework for rape and pillage, slavery and exploitation, theft, murder, and genocide.       —Rivera Sun writing in Dandelion Salad.

The current U.S. sword rattling trying to topple the government of Nicholas Maduro in Venezuela is the 68th U.S. attempt at regime change, a "national interests" strategy already demonstrating disastrous and failed results most notably in Afghanistan, Iraq, and Libya in recent years. 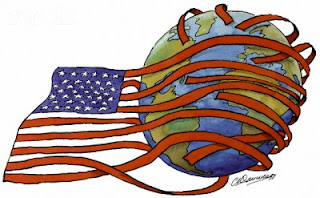 Recently Jimmy Carter said about Venezuela's version of democracy: "as a matter of fact, of the 92 elections that we've monitored, I would say that the election process in Venezuela is the best in the world." To cast a vote, Venezuelans touch a computer screen, then receive a paper receipt, which they have to verify and deposit in a ballot box a system (unlike in the U.S.) which is virtually tamper proof because to hack the computers and then stuff the ballot box to match the rigged vote is impossible.

According to Telesur, despite the U.S. embargo and severe economic war against it, Venezuela under Maduro has managed to offer free healthcare to more than 60%; it has rated high on the Human Development Index, surpassing most LatAm countries; it has built 3 million homes for poor and working class people, 1.8 million of them under Maduro; it has provided more than 4.8 million computers and over 100 million technology textbooks to students across the country, and more than 20,000 schools have received new computer equipment; it ranks sixth in the world in terms of enrollment in primary education and has increased secondary education to embrace 73%; and there have been civil rights gains of oppressed sectors of the society such as women, Afro-indigenous people, and the LGBTQ community.
Washington has been trying to interfere with Venezuela ever since Hugo Chavez was elected, with several assassination attempts on his life, and one on Madura’s life last year by drone. The conflict fault line is a racial one as demonstrated in two Venezuelan rallies, one on Bolivar Avenue in Caracas on Saturday to lend strong support to President Maduro and let the world know that Venezuela is to be respected, the other in the eastern Caracas district of Las Mercedes, in the Plaza Alfredo Sadel in support of #45-sanctioned fake president Guaido. But notice, of the thousands upon thousands of persons on Avenida Bolivar, all were people of color, whereas the white faces of the malcontents in Plaza Alfred Sadel were those of the advantaged Venezuelan class, backed by a light-skinned, wealthy, internationalist group operating under a plan designed by neocons in Washington to control Venezuela's oil and wealth. At that rally the opposition removed the Venezuelan flag, to display massive U.S. and Israeli flags, and pro-#45 puppets (one of #45-as-the Statue–of-Liberty, with the Christian cross around his neck).
But, contrary to what it puts out, U.S. sword rattling is not motivated by any concern whatsoever with socialism, communism, the Bolivarian revolution, or democracy for that matter. Nor is it about the humanitarian aid Bolton offered to send Venezuela . (Recently twitter wiped out 2,000 pro-Venezuela accounts to keep the American people "better informed.") #45’s pick to bring “Democracy” to Venezuela, war criminal Elliott Abrams, has spent his life crushing democracy. His record goes back to 1980 when 75,000 Salvadorans were murdered by government-sanctioned death squads; he supported the government of Guatemala’s murder of over 200,000 people and the destruction of over 600 peasant villages which simply disappeared (I know, I was there. Now Guatemala seems poised for anotehr coup.) In the Contra war in Nicaragua, Abrams pled guilty to lying about U.S. complicity in tens of thousands of deaths. Under George Bush’s presidency he oversaw the abortive coup against Hugo Chavez. Sanctions under Bush escalated under Obama, and further escalated under #45 so that in the past year, the U.S. has managed to bleed Venezuela of billions of dollars.

The U.S. principal motivator, as is always the case with so-called regime change, happens to be Venezuela’s rich oil and gold reserves, especially now that fracking  has peaked as the best wells have been tapped, and to exploit the remainder is costing more, so that fracking is already losing millions. Any sensible country would recognize the writing on the wall, and see fracking’s decline as a golden invitation to transition even more rapidly to renewables, but as it props up its oil industry by moving to help itself to Venezuela’s oil, the U.S. romance with fossil fuels shows no let up. The threat of actual invasion is very real: Bolton’s notepad revealed a plan to send 5,000 troops to the Colombia-Venezuelan border, a move calculated to conceal the actual number already deployed, which a source reported as closer to 30,000.

In a recent article, David Sladky writes: it’s not…seen as sexy to protest war anymore. But when enough people learn that the U.S. warfare industry and U.S. military are the greatest purveyors of global warming through their massive use of fossil fuel, people may sing a different tune. Already major hands-off-Venezuela demonstrations have been called  by Popular Resistance for March 16 in Washington, D.C., and local events are slated at Lake Merritt Columns, Sunday, February 10 at 1 PM, (info: https://sanfrancisco.carpe-diem.events/calendar/9561449-u-s-hands-off-venezuela-rally-at-lake-merritt-columns/ and The Bridge Walk in San Francisco on Sunday, February 10, by Code Pink. The walk meets at 11:45 AM, either at the S.F. or Marin end of the eastern walkway of the bridge. Info: ratherbenyckeling@comcast.net.

Sign on as a citizen cosponsor of the Prevention of Arms Race Act to block Trump’s banned nukes at: https://act.winwithoutwar.org/act/citizen-cosponsor-prevent-nuclear-arms-race?source=em20190201_2&t=6&referring_akid=3143.294094.jGIvXP

Urge Fiscal Hawks in Congress to keep their hands off Social Security at https://secure.ncpssm.org/content/keep-your-hands-off-Social-Security0204201?utm_source=silverpop&utm_medium=email&utm_campaign=2019_February_04_Petition_INITIAL1&utm_content=&eml_name=2019_February_04_Petition_INITIAL1&eml_id=38755856&spMailingID=38755856&spUserID=Njc2ODQxMTYwODk4S0&spJobID=1460090964&spReportId=MTQ2MDA5MDk2NAS2