What’s Killing Life On The Planet

Aside from being focused on the Western mind, and the Western way of doing things, this week’s newsletter examines militarization, and pipelines, linking them to climate collapse, and the over-all need to de-carbonize the economy. Both issues point to a PEACE IN ACTION MOVEMENT. If that sounds like the blind men palpating the elephant, by the last sentence, elephant anatomy should become clear. 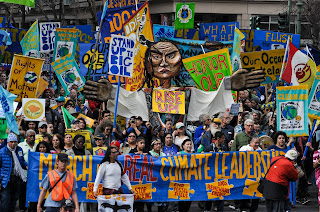 Today the Bay Area joined many other U.S. cities celebrating April 29 in the biggest ever turnout for re-claiming the climate the Bay Area has ever seen. In the process of handing out nearly 300 flyers—two even went to Barbara Lee, our stand-alone voice for restraint in the US congressional cowboy cabal—I stumbled on any number of people I knew. Stumbled because most of the time the crowd was so dense, I couldn’t even see where I was going, let alone where they were coming from.

(For additional facts and links and how you can reprint both two-sided flyers—they’re open source—see below).

And before any of that happened, I formed part of a ragged little band of uppity Code Pinkers shutting down a Wells Fargo Bank, one of some 20 banks capitalizing Energy Transfer Partners, the corporation backing the Dakota Access Pipeline. “You won’t mind if we just run this pipeline through your bank,” we shouted as we unspooled a 20-foot long collapsible black pipe displaying the message #DIVEST FROM SUPPORTING THE DAPL. 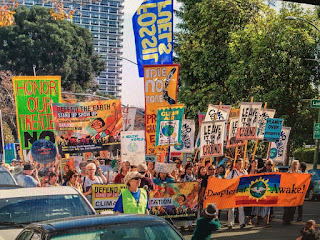 Trump’s technocrats to the contrary, the culture seems finally to have made the connection that human activity is causing global warming and eventual climate collapse. In the history of human affairs this ideational breakthrough parallels that other great aha! moment, when some less-than-dim-wit discovered that certain human activity refreshes the supply of tiny humans.

We need to think about the connection between warmaking and climate collapse.. As the planet heats up, there will be massive displacement, resulting in massive civil unrest. Power of the people to push back requires a nation-wide PEACE IN ACTION MOVEMENT.

Fact: Pipelines and their construction is the CIVILIAN TWIN OF THE PENTAGON. At the height of the Dakota Access Pipeline protest, the National Sheriff’s Association lobbied for more military gear and (under the auspices of FEMA “Garden Plot” and “Cable Splicer”) law enforcement officials began pouring into North Dakota. 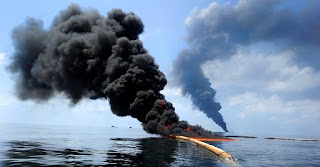 The movement to de-carbonize the climate needs to find itself under the
PEACE IN ACTION MOVEMENT, pushing back against the two evil twins: Pentagon and Pipelines (This newsletter’s Cowboys & Indians, Part I addresses how corporations appropriating ancestral native American lands to lay pipelines opened up yet another chapter of the American Indian Wars. Part II describes how FEMA used the reservation to develop population control procedures).

The time to organize a massive PEACE IN ACTION MOVEMENT is NOW.

WHAT YOU CAN DO.

•Move your money to a credit union, or other institution not capitalizing the Dakota Access Pipeline.

•Join (or start) a people’s budget initiative in your community.
http://communitydemocracyproject.org/

*Use outdoor theater strategy to bring your point home

•Reproduce and circulate the two-sided flyers copied below:

Please consider withdrawing your money if you bank at any of these institutions:

URGE RETIREMENT FUNDS TO DIVEST FROM FUNDING THE DAPL

If you contribute to or benefit as a retiree from a pension fund please consider urging your fund managers to divest from any entities capitalizing the DAPL.

Here is a sample letter:

It has come to my attention that ________ fund benefits from the Dakota Access Pipeline, Energy Transfer Partners, and other entities capitalizing pipelines:
I cannot in right conscience benefit from retirement funds so-derived because:
1. Fossil fuels are contributing to climate collapse.
2. The probability is that an oil leak will contaminate the water that over six million (that’s 6,000,000) people depend on for drinking, irrigating, cooking and eating.
3. The land is designated by the Sioux as a sacred site.
4. The DAPL was re-rerouted through indigenous lands ceded by the U.S. to the Sioux Nation by the treaties of Fort Laramie of  1851 and 1868.
5. The so-called easement allowing the pipeline to run through Standing Rock is illegally issued by the Army Corps of Engineers.
For these reasons, your board has the imperative necessity to divest forthwith of all entities capitalizing the Dakota Access Pipeline and all other pipelines.
Thank you. 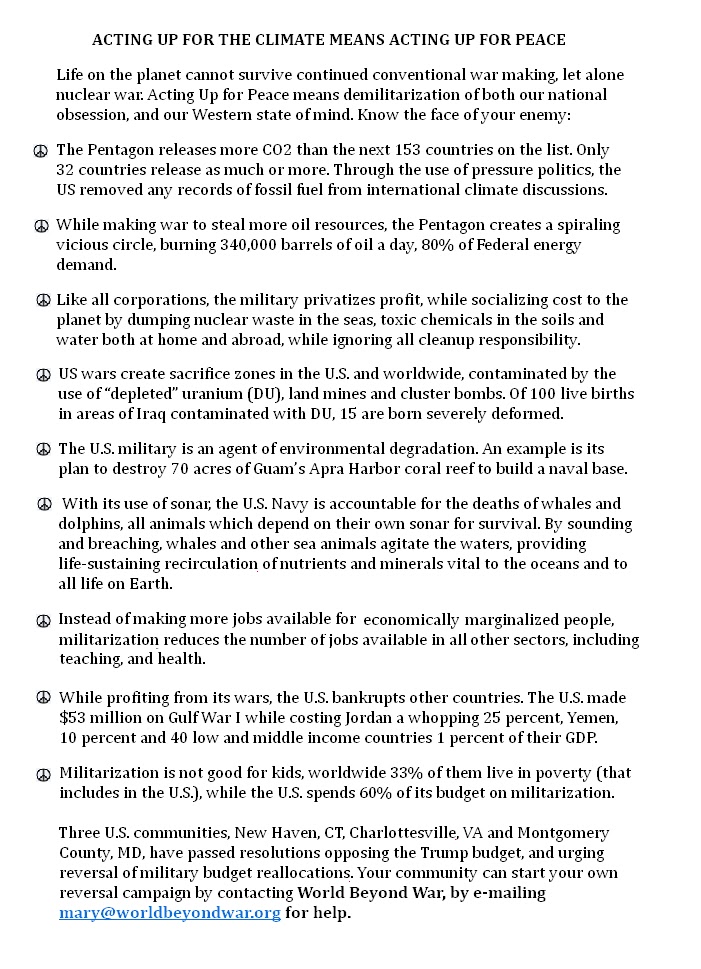 •Speak out about how militarism’s consumption of fossil fuel impacts the climate.
https://canadianclimateaction.wordpress.com/the-role-of-militarism/
•Engage in discussions reminding others of the cost of waging wars in terms of fuel consumption and resulting pollution of air, water and soils.
http://www.rootsaction.org/news-a-views/1447-war-and-warming-can-we-save-the-planet-without-taking-on-the-pentagon

•Remind others of the need to examine the role of the Pentagon and war contractors in contributing to planetary warming.
http://www.ipb.org/books/demilitarization-for-deep-decarbonization-reducing-militarism-and-military-expenditures/

•Join (or start) a people’s budget initiative in my community.
http://communitydemocracyproject.org/

•Reduce my and my household’s consumption. https://www.treehugger.com/culture/10-tips-make-every-day-earth-day.html

•Reprint and circulate this flyer.
http://devilstangobook.blogspot.com

Flowers Amidst This Week’s Thorns

For the third time, a Trump immigration policy has been struck down on unconstitutional grounds by Judge William H. Orrick of the 9th District Court.  What about unconstitutional don’t they get?

News comes from the good-for-nothing Dems that a majority of House Dems now support medicare for all bill. Shall we hold our breath?

UK scheduled for first coal-free work day since before 1745.

City of San Francisco at work to create its own net neutrality on the assumption that the internet is a right for all.

Cities to divest from Wells Fargo: Alameda, Davis, and now Berkeley is expected to join them, moving its money to the public bank of Oakland now on the drawing board.

Visionary police reforms in Providence, RI, provide an example for the rest of the country.

Berkeley Energy Group is putting coal miners back to work installing the largest solar project in Appalachia on top of a closed mountaintop strip mine, just one example of a massive  retooling of the energy industry throughout the country.

Because it’s Harvard: Harvard U elects to “pause” its investments in some fossil fuels.