When Did This Become This 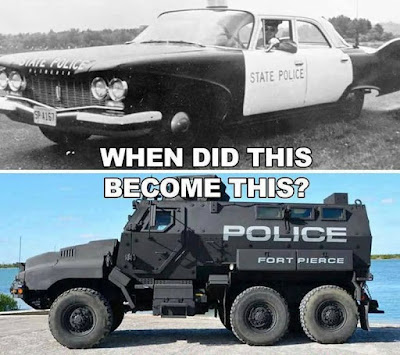 “2017 Deadliest on Record for Killings by Police”  reads the headline of a recent article by Rachel Bevins. The author  consults the “Killed by Police” database to lay out her statistics. So far, police zealotry has resulted in 714 murders, indicating that this year may set the record for assassination-by-police. Murder-to-murder, an aggrieved U.S. public has registered crescendoing outrage. The Rodney King beating may furnish the trend’s overture. Or perhaps Trayvon Martin (murdered by an unhinged vigilante). But certainly the ruthless murder of Oscar Grant furnishes an iconic jumping off point. Since then we have had Michael Brown (left in the street to bleed out for hours), Tamir Rice (12 years old wielding a toy gun), Sandra Bland (murdered for a left turn), Freddie Gray (murdered for having a fragile neck), all of them black people, from U.S. regions as far apart as Missouri, Florida, and Maryland. Holding the thousands upon thousands of names of victims, primarily those of people of color, in heart and mind requires the kilobyte memory of the Recording Angel herself.

For a public which remains relatively unconcerned about the victimization of the poor, and of people of color, police were happy to furnish a wake-up call with the recent murder of Justine Damond, a manifestly white (and beautiful) Australian woman shot and killed when she made the fatal mistake of calling 911 to report a neighborhood disturbance. The newspapers were happy to run her picture (good for sales): a magnificent, blonde, manifestly white woman, her life cruelly snuffed out.

The political climate is ripe to run those annual mortality figures up with militarization of law enforcement, with the current Resident whose recent remarks indicate it’s open season now for uncontested police brutality, and whose obsession to erect an exclusionary border wall will call on Israeli firm, Elbit Systems to build; with an Attorney General hell-bent on increasing police larceny with asset forfeiture,  with a 1033 Federal Program which force feeds municipal police departments with battle-grade military hardware, with funneling discharged vets, many suffering from PTSD, into municipal police, not to mention Urban Shield, a program billed as “intense training for intense times,” and stop and frisk and arrest quota policies in force in major cities like New York. 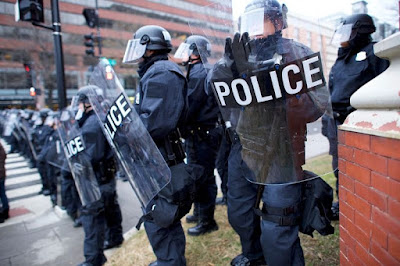 What Happened to ”Serve and Protect?”


According to the Official Story, the 1033 Program was created by the National Defense Authorization Act of Fiscal 1997 to “transfer excess military equipment to civilian law enforcement agencies,” signed into law by Resident Clinton, but fairly hidden from public attention until the murder of Michael Brown by police in 2014 in Ferguson, MO. The most commonly transferred material from federal to municipal custody was ammunition. But after 911, Michael Chertoff, who happens to hold dual citizenship with Israel was instrumental not only in representing the firm manufacturing airport body scanners, but as head of Homeland Security under George Bush, promoted the acquisition of battle-grade hardware—not just ammunition—by municipal “law enforcement.”

According to Max Blumenthal, the “israelization” of American law enforcement began after 9-11, when the federal government began to look to the Israelis for counter-terrorism expertise. In response, the Israel lobby “provided thousands of top cops with all-expense paid trips to Israel and stateside training sessions with Israeli military and intelligence officials.” He states further that many of those trips and trainings were arranged by the Jewish Institute for National Security of America (JINSA), a pro-Israel organization whose advisors have included Douglas Feith and Richard Perle (both of whom hold dual citizenship with Israel).

The chief of the police force, Timothy Fitch, responsible for the murder of Michael Brown in Ferguson had received training from the Israeli Defense Forces (IDF); the force responsible for nearly killing veteran Scott Olsen during the Oakland Occupy trained with the IDF.

Israeli counter-terrorism expertise is the outgrowth of Israel’s Palestinian policy, a policy which more and more is bring compared to South African apartheid, and to American “Indian removal” policies. It leaves Gaza with fewer than four hours of electricity a day, with black outs and water shortages. Palestinian men and children are being held in Israeli prisons for months on end without trial. Palestinian homes are being bulldozed with impunity and replaced with thousands of illegal settlement units. Repeatedly Israel has been sanctioned by the United Nations for its colonial settler policies, with opposition to those sanctions consistently coming from the United States. I would go so far as to say that Palestinians are among many people of color in the front lines of the world-wide struggle to obtain manumission.

In an August 16 article headlined “Racial Supremacy and the Zionist Exception” David Lloyd points out the contradiction between the readiness by American politicians to condemn the recent White Supremacist events in Charlottesville, VA, with their ardent support for a racist regime in Israel that is no less inspired by racial supremacy and an ideology that supports ethnic cleansing, demonstrated by signing on to a bill that would protect the State of Israel by imposing civil and possible criminal penalties on anyone opposing violations of Palestinian rights, and by advocating the boycott of Israel’s economic, academic or cultural institutions.


My (Jewish) mother-in-law used to say “When you sleep with dogs, you catch fleas.” Of course it sounds even pithier in Polish. American law enforcement has fallen victim to an Israeli flea infestation, and by doing so has yielded United States sovereignty. Until that unholy alliance is ruptured, the United States will remain the client state of Israel.

Sign the Jewish Voice for Peace petition to the Anti-Defamation League to end the deadly exchange with Israeli police that mimics Israeli military occupation.


And now for something you’ll really enjoy:  watch Mozart stick it to Trumpocracy.

A Scattering of Roses Amongst This Week’s Thorns

Suleiman Abdullah Salim, Mohamed Ahmed Ben Soud, and Obaidullah secured a settlement from James Mitchell and John “Bruce” Jessen, the two psychologists who designed and implemented the CIA torture program that ensnared two of them and killed a relative of the third.

The U.S. Court of Appeals for the Second Circuit ruled that the New York State Department of Environmental Conservation (NYSDEC) had the authority to deny a Clean Water Act permit to four companies planning to construct the Constitution Pipeline, which would have carried fracked gas from Pennsylvania to Eastern New York State.

Nine Eastern states (five with Republican governors) agree to cut power plant Emissions an extra 90%.
For the second time this week, citing the threat to climate change, another US court rejects a federal regulators approval of a $3.5 billion natural gas pipeline

In Texas, Judge Nelva Gonzales Ramos rules against Senate Bill 14 voter ID law, on the grounds that it would place a “disproportionate burden” on black and  Latino voters.