Shedding the Dark Legacy of 1945

This week the world marks the 72nd anniversary of the dropping of atomic bombs on Hiroshima and Nagasaki by the U.S. government eager to grandstand by reminding the Eastern bloc that U.S. is the world’s Number One strong man.

In one small part of the world, I will join the monthly demonstration taking place on the 11th of every month outside the Japanese consulate in San Francisco, sponsored by the No Nukes Action Committee, to commemorate the nuclear catastrophe at Fukushima which occurred on March 11th, 2011, and to confront the government of Prime Minister Abe as the leader of one of American’s many client states.

Writing letters to a Prime Minister who is probably as moss-backed as Donald Trump, but not quite as unpredictable, represents some kind of folly—except that this demonstration is live-streamed directly to Japan where it reminds many Japanese traumatized by the actions of their government that in a small part of the world, there are a few Americans left still capable of expressing hamdard* on their behalf. (Hamdard is the Dari word for ‘shared pain.’)

With some help from my nuclear-resisting friends, and on behalf of the No Nukes Action Committee, I share this month’s letter to P.M. Abe:

This week marks the 72nd anniversary of the most heinous war crime ever perpetrated on one warring nation by another: the bombing of Hiroshima and Nagasaki.

You sir, were not yet born. But by the time of your birth, thanks to the machinations of the U.S. government in collaboration with war criminal Matsutaro Shoriki, and despite the deep aversion of the Japanese people, the government of Japan was sold on nuclear energy, and Japan’s period of nuclear research and nuclear plant construction by American companies began.

Your administration has inherited this dark legacy. But at the same time, it has inherited what could turn out to be two magnificent opportunities if your government is brave enough to pursue them:

•Your administration could countermand the order forcing persons displaced by the nuclear disaster to return to live in the contaminated areas of Fukushima and in particular, the city of Namie, and to re-populate an area even more contaminated than Chernobyl with its one thousand square mile exclusion zone.

Fukushima 311 Voices’ recent post at https://fukushima311voices.wordpr describes the work of the Fukuichi Area Environmental Radiation Monitoring Project team, a group of people over 60 years of age who have ventured into these heavily contaminated areas to obtain radiation readings at great risk to their own lives. Their post includes a 372 plot map of Namie. each plot measuring 375 meters X 250 meters in the Futaba District of Fukushima prefecture showing 13 plots which register 2 million to 3 million Bequerels contamination by Cesium 137 and Cesium 134 per square meters; 76 plots registering between 1 and 2 million Bq/m3;  an additional 111 plots registering between 400 thousand and 1 million Bq/m3; plus 160 plots showing contamination ranging from 40,000 Bq/m3 to 400, thousand. But 9 plots show contamination exceeding 3 million Bq/m3. 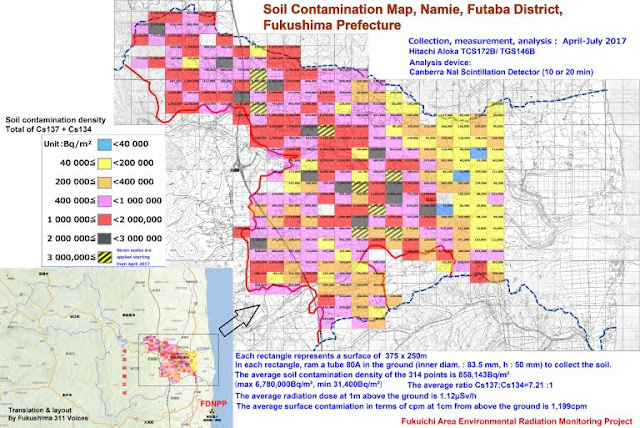 The average surface count per minute above ground is 1,199 counts per minute.  At this average level of contamination, drinking, eating or staying overnight is prohibited; even adults, including nuclear workers, are not allowed to stay more than 10 hours—and your government is proposing that those displaced persons must return there to live???

• Still another opportunity presents itself: Recently the Tokyo Electric Power Company announced plans to dump the 770,000 tons of tritium-contaminated water presently being stored in some 580 tanks at the Fukushima plant into the Pacific Ocean based on the naïve theory that the ocean is so big it can absorb an insult of such magnitude. But the dumping cannot occur without the consent of your government. Your opportunity and the opportunity of your government is to recognize the irreparable harm such a measure would entail, and to prohibit TEPCO from realizing such an eco-cidal plan.

Besides repeated cover-ups, TEPCO’s criminal track record includes failing to meet the basic safety  requirements which might have prevented the Fukushima-Daiichi emergency generators from failing. With 40% of marine species already unfit for human consumption, dumping hundreds of thousands of tons of tritium-contaminated water would further devastate sea life.

Will you step up to the plate? Will your government recognize that Japan is part of a larger planetary system which transcends national boundaries, and political maneuvering by prohibiting TEPCO from dumping its tritium-contaminated water into the Pacific, whose waters are shared by 42 other countries and 12 colonial dependencies?

Will your government uphold the human right of the survivors of Fukushima’s nuclear catastrophe by countermanding your administrations’s order condemning them to face the risk of radiation disease and death by forcing them to return to an area more heavily contaminated than Chernobyl?

Will your government have the courage to seize these opportunities? Or will you
surrender Japan’s independence by following in the dark footsteps of Japan’s American-imposed nuclear legacy?

Tell the Japanese Government: don’t dump hundreds of thousands of tons of radioactive water into the Pacific.

Endorse and circulate the WILPF petition supporting the UN Treaty on the Prohibition of Nuclear Weapons adopted by 122 countries on July 7, 2017.

A Few Roses Amongst This Week’s Thorns

The U.S. Court of Appeals for the District of Columbia rules that the EPA must immediately reinstate the Obama-era pollution rule that sets methane emission standards for the oil and natural gas industry.

Spains’s Garoña, a boiling water reactor will be shut down after the ministry of energy announced its license will not be renewed.

Santee Cooper Utilities and the Scana Corporation, co-owners of the Summer, N.C.  light water reactor building project announced cancellation owing to cost overruns, and inability of the nuclear industry to compete with wind and solar.

Endorse the petition to stop Scott Pruit’s waffling on the issue of methane pollution, a gas far more lethal to global warming even than C02.

Endorse the no war planes over Syria (in violation of sovereign airspace) petititon now.