Petroleum and its By-product: Plastic Seas

Late last year the petroleum giants, including Exxon and Shell announced an allocation of $180 billion for modernizing plastic production and distribution, insuring an almost permanent pollution of our oceans. 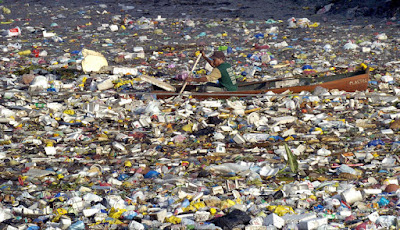 Although Theresa May’s UK devoted a great deal of talk to reducing plastic pollution, a motion last year to enact deposit return on plastic bottles failed to pass Parliament. But following China’s decision to ban imports of foreign recyclable material, pushing against these set-backs, Brussels announced an allocation of 340 million euros to change poor tax habits, furthering a plan that aims to make all packaging reusable or recyclable by 2030 in an effort to change the European mindset.

A recent article by Reader Supported News calls for an American plastics intervention, but in the absence of globally-coordinated efforts, looking to failed government structures—call them nations, especially now—seems unrealistic.

The use of plastics contributes to endocrine disruption. That alone is a good reason to stay away from all plastic products, including appliances, as much as possible.   Fossil fuels are killing not only humans but all life on this planet of ours, including what it does to the soils and the water.

Remember, too, that all plastics are petroleum products. They are not biodegradable. They do not decompose.  At best they break down into minute particles which find their ways into the digestive systems of land and sea birds, fish, and mammals, including human mammals..

Anything you put into the earth’s ecosystem that does not decompose, that is, anything inorganic, pollutes our planet for all eternity.

Our fisheries are failing, our continental shelves are slowing suffocating in increasingly long swaths of dead coastlines, the effect mainly of pesticide run-off, the result of increased corn subsidies for a crop that requires massive injections of nitrogen, and the reality of a Pacific garbage patch the size of Texas is no myth as a sailor friend reported to me, even finding a television set—relic of our dying culture—when he became becalmed there. I wrote a poem about it:

Stuck by the swell
of becalmed seas,
Leno wisecracks
at an empty sky,
Carson gawks
as horsetails track the trades,
a school of canned guffaws
swims just below the shallows.
Cathode ray reliquary
marks culture gone to brine:
Farnsworth’s tube, its cord
trapeze to barnacles.

Both profit driven and non-profit enterprises are stepping in where more concerted efforts have failed. Municipal governments can pass ordinances banning the use of plastic bags. Recently the Icelandic chain of UK supermarkets announced their packaging would become plastics-free. Greenpeace is circulating a petition demanding that Coca Cola cease its production of millions of plastic bottles a year in favor of establishing stations where the public can draw the product in reusable containers.

How can we live responsibly, given that our lives are embedded in a petroleum-driven economic culture? How can we reduce and eventually eliminate the use of plastics in our homes, and our purchasing lives, and in our planet-spendthrift Christmas giving? Individual efforts make a difference. One of them, spearheaded by Costa Rican artist Carolina Sevilla recovers ocean plastic and makes fashions out of it, is an example of such an individual initiative. But each one of us need to think how best to help compensate for the absence of globally coordinated initiatives.

Most critical of all, R & D allocations need to support the world’s chemists to develop biodegradable replacement products, to end the age of petroleum and its byproducts altogether.

Please sign Greenpeace petition  to urge supermarkets to eliminate plastic use in packaging. 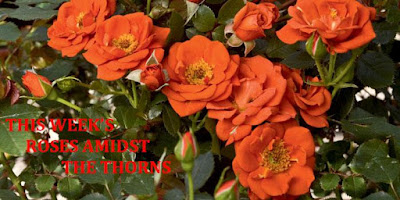 Florida restores voting rights to over a million former felons in Novembers midterms.

Governors in in Montana and New York sign executive orders mandating that all internet providers and state contracts must abide by net neutrality rules.

Arkansas stands up to Monsanto by banning dicamba pesticide.

Oregon votes to keep funding Medicaid throughout the state.
New Orleans passes resolution calling on the city to avoid contracting or investing in corporations that consistently violate human, civil, or labor rights—including Israel.

Pennsylvania’s gerrymandered House map was jus struck down, with important implications for the 2018 midterms.

Department of Education rules that Texas violated rights of disabled students.
Posted by Cecile Pineda at 11:56 AM