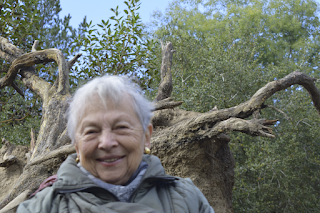 Our beloved Cecile passed peacefully away on August 11th, 2022 with her two son's David and Michael present.She will be missed by everyone she touched, except maybe for former Berkeley Mayor Tom Bates (who she raked over the coals when he presided over the ceremonial event for her)!

Cecile received a number of prominent obituaries from the NY Times and the Washington Post (papers she hated), besides many others including one in Spanish. Cecile passed her political commentary work to Lisa Savage who wrote this memorial for her.

For more about her, she has a Wikipedia page, besides her original webpage.  Or you can see some of her video's online, for example this interview with Cecile that Anke Burger did in 2021... There are other videos of her if you google her.

This blog is the best online source for her writings going back to 2013.  The last few years are also mirrored over at Medium.com.  This blog has her extensive writings that go back nine years. Her papers are housed at Stanford.

Cecile suffered a Stroke in late February 2022 which resulted in her ability to speak or work at the computer.  She recovered in just a few months.  Nearly two years prior, her doctor gave her a year to live following the horrific fires that impacted her heart.  She made it nearly twice that.