"Tombeaux and Other Delights" for Cecile Pineda and Her Friends 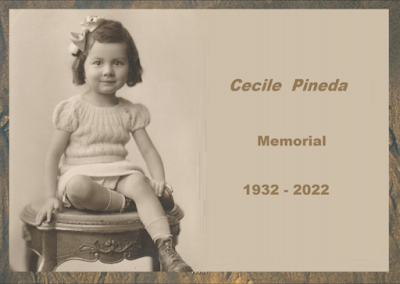 I am trying to understand being born to the urge to destroy, to rip mountains apart, to pour thousand-year poison into the seas, to belch soot into the sky, to kill everything that lives. Where does it start, this impulse? In what mind? What axle drives this wheel?
—Cecile Pineda. Devil’s Tango

I do not think anymore that writing—mine or another’s—can change the world... Perhaps in their small way, writers can answer for those who are voiceless in their extreme deprivation and suffering. But at best, in the very smallest scheme, writing can provide a moment of grace, both for her who writes and him who reads, in a very dark world.
—Cecile Pineda, The Bloomsbury Review, 2004.

Following Roger's introduction a photo slideshow of Cecile was shown while the Barefoot All-stars performed.

Below is Roger Herried's Introduction

I first met Cecile Pineda in December 2011 at an anti-nuclear conference concerning the Fukushima meltdowns. I'm fortunate to have been one of her many friends. She accomplished much with her books, theatrical work, teaching, activism, and blogging.

Back in 2013, she started writing a regular blog with the help of a tech person. After her tech friend moved away, Cecile asked if I would take her place. I was more than happy to do this since it included a wonderful lunch and a partner to talk with on Sundays. We eventually added a weekly trip to the Redwoods in the Oakland hills.

She also saved my life back in 2016 when I needed emergency surgery. She obtained a referral for a surgeon after I lost my medical insurance, getting into surgery in weeks rather than months.

Cecile had a stroke in late February of 2022 just days after the US government announced plans to withhold Afghanistan's assets, endangering the country's struggling people. This broke her heart as she sought ways to help the Afghan people. The stroke damaged her ability to talk and write, but by June, she was back at the computer and talking to us again. She even planned a trip to Chaco Canyon in New Mexico. She also maintained her fierce independence, living by herself, and doing gardening at the Dana Street coop. Then she suffered a series of falls in July that resulted in her rapid decline and passing on August 11th with her sons at her side.

We had just finished lunch, and I was ready to leave when to my surprise, she asked if I would tell her a story!

So I told her about the life of a Chickasaw woman named Mary Francis Thompson, based on a movie I'd seen.

In 1895, Mary Francis was born in Oklahoma where she grew up exploring the plains and traditional Chickasaw community. She adored listening to her father's traditional native American stories. At the age of ten, Mary Francis was finally allowed to go to a tribal Chickasaw stomp dance. During the dance, she ran into the inner circle of elders which wasn't allowed, so her dad Thomas had to catch her and pull her back to the outer circle. While herding her back to the outer circle, the medicine man spoke to him briefly in Chickasaw, which I will share with you at the end of this story.

Mary Francis would grow up wanting to be an actress, against her father's wishes. She was the first Native American to attend Oklahoma's women's college. Her drama professor and mentor, Frances Dinsmore Davis, accidentally heard her perform a Chickasaw story in Mary's dorm room at one point. She suggested that Mary Francis do one of her tribe's stories rather than the usual Shakespearean piece for her final graduation. It was a big hit as most white people had never heard of or seen anything like it before. Mary Frances performed her tribe's songs and danced using both English and her own language.

Upon graduation, Ms. Davis gave Mary Francis a referral to the country's top acting school (Carnegie acting school in Pittsburgh) at that time and urged Mary Francis to seek a career as an actress. She also referred her to Thurlow Lieurance who was in charge of a Chautauqua tour across the Midwest. Thurlow offered Mary Francis a paying job that covered the rest of her college tuition!

After graduating from the two-year college, she told her dad about continuing with her education. Thomas demanded that she come home and become a teacher. Mary Frances refused. When Thomas realized he couldn't stop her, he suggested that she take a stage name. The movie took a bit of license from the historic account, with her father suggesting that she take the stage name of Te Ata or bearer of the Morning.

Mary France's performances during the Chautauqua turned her into the event's top draw. Tribal people from across the region came to watch and asked if she might perform their songs and stories. After the Chautauqua finished, to her father's delight, she was refused by Carnegie. But she refused to accept their denial and instead traveled to Pittsburgh and won admission after doing an audition of her skills. After finishing her studies at Carnegie she went to Broadway.

Getting a Broadway acting job wasn't easy as it took her over a year to finally land a part. She started performing her traditional stories at private parties to pay for room and board. During one performance, she was introduced to Eleanor Roosevelt and Dr. George Fisher. She and George, a New York City professor, struck up a romantic relationship.

He proposed to her after Mary Francis' first successful stage play. She informed George they'd have to travel back to Oklahoma to get her father's blessing.

Upon their arrival back in Oklahoma, George requested Mary Francis's hand to Thomas. But he refused to give his permission unless the two of them came back to Oklahoma. Knowing that Mary Francis would never accept such a demand, George prepared to go back to New York. As word got out about her success, she agreed to perform in her hometown before going back east. Her father refused to attend. But he did sneak in near the very end and watched her perform one of the stories he once told her as a child. He left without her family seeing him, going back to bed as he wasn't feeling well.

Afterward, she drove George to the train station, as he needed to get back to New York. Just before hopping onto the train, he handed her a batch of letters that he'd forgotten to give to her. To her astonishment, one of the letters was from Eleanor Roosevelt who asked if she would perform at FDR's 1933 inaugural white-house celebration!

She immediately went into her father's bedroom and told him that if he wouldn't die (which she thought he was on his deathbed) that she would instead stay home and take care of him as long as necessary!

At this point, her father opened up to her, telling her as she knew very well that he had been opposed to her plan to go to college, become an actress, or perform. He apologized for his behavior, claiming that he was afraid that going out into the white man's world might endanger her life. But then he divulged to her what the Chickasaw elder told him back when she was ten. The elder told him that she was destined to become a storyteller for her people. It was this statement that had made him fearful, resulting in his attempts to hold her back.

After telling her this, Thomas gave permission to perform at the white-house and marry George.

Just as I reached this point in telling the story, Cecile burst out crying for many minutes. I was taken aback by her emotional response! After regaining composure, she said this was her story and helped her come to terms with her father.

Te Ata was the premiere First Nation storyteller of the 20th Century, receiving many accolades. She passed away barely 25 days before her 100th birthday, exactly what Cecile did before her 90th!

You can see the movie "Te Ata" on Netflix or read her biography here.