Burned Out on Vietnam

For the past two weeks, Americans—some of them—have been glued to their TV screens, watching the eight-part series by Ken Burns: Vietnam. On its face, Burn's presentation is a monumental effort, but like a large legal case, it allows the proponent plenty of room to weave his own agenda into the narrative with little choice left the viewer but either to run away, or submit to further indoctrination into this society's growing militarization cult.

But from my perspective, as someone who served during that war, watching “Vietnam,” I could barely stand sitting through a single episode.  When it showed clips of armed troops entering a village, I found myself switching stations.

Burn's 18-hour presentation drills into the details of the battles, of Presidents Johnson and Nixon's political agendas, and the acknowledgement that although the war was clearly unwinnable, once fully enmeshed in the briar patch, it had to be fought to the finish.  But imagine any attempt by Burns to develop one of the most blatant themes, best summarized by a good old boy who heard this from Johnson, himself:  “some of my friends were making too much money to want to withdraw!”

Another detail that might have been given more play involves Kennedy’s desire to back away from the war, a desire which may in part have led to his assassination.

As part of a recent project where I was collecting images of protest  I came to understood how necessary it was to resort to a small balancing act.  I imagined that I had 10 grains of sand in front of me to represent the totality of a huge event.

Land mines are among many of Burn's unexposed grains of sand, something that would have horrifying consequences long after the war ended. It would take several generations of maimed humans finally to remove the millions of land mines left behind after the war's end. (It wasn't until 2014 that the U.S. finally agreed to abolish land mines, except in North Korea.)

Another grain that might have taken up an entire program is the human and environmental impacts from Agent Orange. Following the war's end American military brass denied the medical impacts both to GI's and untold numbers of civilians for years. Yes, it would be a bit more comforting to vets on this side of the war had he covered the impacts to us, but imagine Burns actually taking the time even to show the maps or some of the stark images! 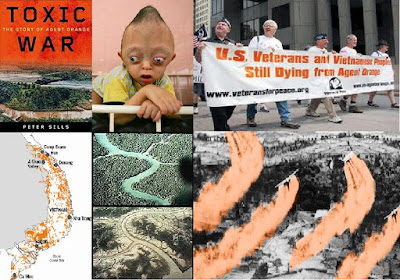 Another grain of sand is the mental trauma to service men and to generations of Vietnamese people who survived.  A veteran friend of mine, who earned the nickname of Rambo, spent over 20 years on the San Francisco streets homeless, crippled from exposure to Agent Orange that left him unable to wear shoes year around, and unable to forget the cold blooded murders of Vietnamese of all ages which still haunted him. According to the National Coalition for the Homeless, 47% homeless veterans are those who served in Vietnam.

Clinton may have finally opened up trade relations with the country but this issue goes far deeper than just PTSD, trust issues or even political anger.  Burn's gloss over of racism during the heat of the war or American GIs use of terms like "Gooks" or "infestation" terminology to rationalize the dehumanization of the enemy is disgraceful but the practice continues in use right up to the present time.

Hundreds of thousands of U.S. military personnel were living among Asians as part of the support system. Subic Bay and what it stands for is another grain of sand. About 500 miles from Vietnam, in Subic Bay the U.S. Navy maintains a base the size of San Francisco, its largest installation outside of the mainland. Taking its inspiration from a Wild West film, the scene recaptures the miles of sheltered walkways, each building separated by a staircase from which prostitutes hang, angling for a customer. Along the enclosed area where one enters the base to change money runs a river studded with small boys in sampans yelling, “For three bucks, fuck my sister.”

Like most U.S. military bases, a two mile strip of brothels known as Alongapo was located where over 70,000 Filipino women many of whom were forced to support their families, were on duty seeking money for sex – paid for by the U.S. taxpayer.  Five bucks to the bar would buy a date upstairs for a girl. During the peak of the war an estimated 50,000 GIs a week were coming to Subic for a bit of R&R from the war zone.

As far away as Taiwan, where my destroyer tender was berthed doing diplomatic duty, within barely 6 months nearly half of the ship's crew of 700 men got caught up engaged to be married. The filthy underside of this business included Mafia loan sharking, gambling activities and immense pilfering of the supply chain. Yes, a duty-free case of the best whisky in the world went for nine bucks, you could outfit entire machine shops with the best quality tools or make 40% interest compounded every payday on military men caught up in the partying. Anyone who might be incautious enough to expose any of this would never make it back stateside alive. The version presented to me was and is not for public consumption to this day.

I had the pleasure of meeting a number of drug entrepreneurs during my tour of duty. The most astonishing operation involved an entire destroyer from the captain on down, who were using their ship to run drugs - taking stock investments that were meant to make very large profits with an extremely fast turn around - a $2,000 investment for a $10K return every three months. They even had a remote lifting system built into the anchor storage chamber to make sure any customs inspections would turn up clean.  Other individuals planned on large single 'gotcha’ moments such as when they were allowed to ship their belongings back from overseas where they were stationed - a nice refrigerator for example, with its insulation removed and replaced with large quantities of cocaine.

Every supply system in the military was leaking large amounts of supplies to military personnel.  From just one of its ships - mine - an average of a million dollars a year went missing - a big chunk of change back then.  What was the connection between the Pentagon’s bloated budget and talk of $500 dollar toilet seats?

For a number of years, nineteen-year-old boys were placed in a national draft lottery where anyone with a number below 100 was forced into the military and shipped out for duty in Vietnam. Healthy boys from small towns with low draft numbers like myself had few options other than escaping to Canada or being accepted into college. I went to the nearest induction center with the only other option available, the request for a short term reserve deferment that would mean three months of boot-camp, three months of active duty and then a return to civilian life as part of the national guard. I was lied to by the recruiter and told they were no longer accepting this type of deferment. As a result I spent four years in the Navy, rather than 2 years in the Army fighting in the war zone.  Yet, upon arriving in boot camp, I discovered that nearly half the recruits in my company were given the above reserve deferment.

Boot camp was no Sargent Pyle moment - within a short time after stepping off the shuttle bus in San Diego, the officer who greeted us made it very clear - we were there to learn how to kill. From that moment on and for the next three months I was indoctrinated into this country's killing machine. Those months forever changed me. Eventually those experiences gave me the ability to say no to our murdering machine, even if I wasn't quite brave enough go CO like many who did. One guy who grew up not far from my hometown went CO soon after we arrived in Asia and was forced to spend a week confined in a muddy pig pen before being discharged to his now-destroyed civilian life.

In Taiwan where nobody approached me because of  the language barrier except for sexual or financial exchanges, I learned what it was to be an "Ugly American"  I experienced the dark underside of the Chinese Chiang Kai-shek dictatorship, from loin clothed slaves carrying 50-pound bags of rice dawn to dusk, over many blocks in the city of Kaohsiung where many were clearly dying, too weak to keep up with me as I passed by.  The off-duty time I spent - not in bars or brothels but in bookstores or reading - kept me sane, but just barely, a reprieve denied many others: at least as many men died from suicide or drug addiction as those who perished in direct combat.  During my solitude - a 19-year-old foreigner in a foreign land - the real question slowly dawned upon me - What was I doing in their country?  I had no answer - I still don't.

A Few of This Week's Roses

An article in the Hartford Courant points out that the courts are finally taking climate science seriously while the other two branches of government still either deny or demur.

Posted by Cecile Pineda at 1:41 PM