The Nevada Desert this time of year is a terrestrial paradise. Through the day the course of the sun fires up the mountains in shades of red to pink, golden, and toward evening dark blues, purples, and finally Payne’s grey as the sun sinks below the horizon, marking the close of one more precious day on Earth.

At night the desert wind quiets down. One by one the stars appear against the velvet black sky, so free of light pollution you can sit outside in a tank top and trace the arc of the Milky Way (our galaxy—imagine!) across the night sky, and speculate that somewhere there is another sun with encircling planets, one of them perhaps supporting more intelligent life than ours.

Directly across the highway, is Creech Air Force Base, 2,300 acres or 3.6 square miles housing the 432 Wing, and the home of the (Grim) Reaper Drones where the U.S. government runs its Death Machine. The land was originally the sacred land of the Western Shoshone who were unceremoniously “removed” by the U.S. government, in violation of the 1893 Treaty of Ruby Valley. It is now home of “The Hunters,” (as the drone operators who train there are celebrated) who will eventually graduate to sit in trailers, qualified to hunt human beings in Afghanistan, Pakistan, Iraq, Yemen and wherever else the U.S. needs to kill innocent civilians. They watch their video screens, tracing their victims’ passage through life, to determine when and how they will face their deaths. 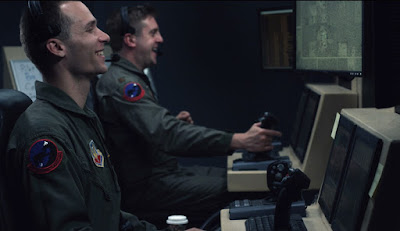 Their victim’s names may not appear so much in the Book of Life as on the White House Resident’s Tuesday list where he (or she) will check names which he or she neither understands, nor knows, approving the next week’s “kills.”  Kills may include old men, women, children out gathering firewood in Afghanistan, small children flying kites. They look like this: 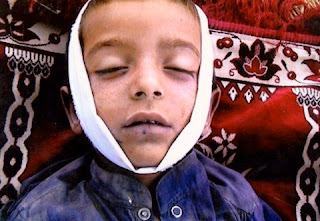 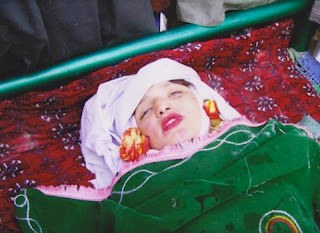 Their bodies look like the bodies of dead children everywhere. They could be our children, except unlike the dead children of Sandy Hook, their deaths are just collateral damage.

In theory, the emergence of drone warfare was a guarantee that for the U.S. and its brave young men (and women), the battlefield would be bloodless on the home front, saving the hemorrhaging for Yemen, Somalia, Libya, Iraq, Afghanistan, Pakistan, Syria and wherever else U.S. drones hunt their victims.

But even possessed of fail-safe death machines, there are no guarantees. Drone pilots suffer from severe PTSD, which is why, as they resign faster than the U.S. can replace them, it allocates a $75,000 budget each to recruit more of them.

In a Creech Air Force Base newsletter article titled “Taking Care of the Hunter Family: Creech Chaplains Keep Airmen Resilient” chaplains and their assistants are described as providing a “precision guided” ministry, including religious support “operations.” Guidelines for chaplaincy at Creech have recently been updated, and chaplain numbers increased. “We’re doubling our manning, helping out the mission by taking care of the hunter family,” Chaplain Major Cameron is quoted as saying. “By adding three new members to the team, we will be able to do that even better.” Their ministry is described as organized on the industrial model, providing spiritual warrior care. But “for emergencies after duty hours, please contact the Nellis Command Post and ask for the 432D WG Duty Chaplain.” Emergencies?  American service people commit suicide almost every hour of every day, exceeding battlefield casualty numbers. 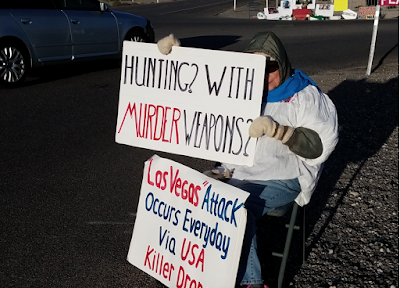 Last week, some 17 demonstrators—the majority of them women—stood on the highway outside Creech AFB protesting drone warfare.  An earlier newsletter describes our daily round. Next year we will celebrate our tenth anniversary serving the spiritual needs of the personnel working there, reminding them—with our signs and varied daily actions—that our numbers, however small, represent the conscience of a nation. 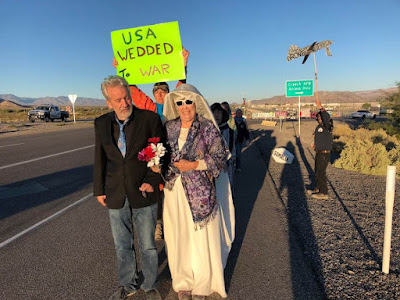 We will through our enactments bring home to them the horrors visited upon innocent Islamic populations whose children have been murdered and dismembered by drone attacks, and whose societies have been destroyed by the unrelenting menace of fire from heaven snuffing out their lives.  We will lament the cruelty of a nation that professes to be Christian. 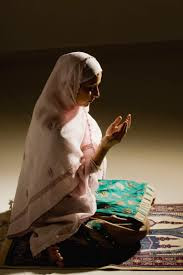 When Moslems pray, rather than folding their hands inward, they hold them open in welcoming God’s grace, “in the name of God, the most kind, the most merciful.” If the U.S. were to pray to such a God, its economy, its warmaking, its corporate-prison culture might have to come to an end. Its life cycle might no longer end in death. Rebirth might become its promise.

1. Resist. The time to sit on the sidelines waiting for “Joe to do it” is past. We are all Joe now.
2. Join up with organizations advocating for demilitarization of our society at home and abroad, advocating for an end to the prison/corporate complex, organizations protecting the environment, protecting the homeless, advocating for low income housing, advocating for the safety of people of color and LGBT in the streets of our nation, advocating for election protection so that yet another election can’t be stolen.
3. Educate yourself and your children about what fascism looks like.
4. Native Americans are on the front lines protecting our seriously depleted natural resources. Although charges have been dismissed for 400 of the Standing Rock water protectors, there are still some 400 people awaiting trial, some of them facing multiple years in prison for resisting the Dakota Access Pipeline. Contributions can be made to their legal defense at

Charges dropped for 400 water protectors. The struggle continue, however until all 800 cases are dismissed.  Please consider contributing to the Dakota Law Project.


Republican mayor turns Lancaster California in the “solar capital of the universe.”

Detroit bands together to being healthy food to food ghettos.
Posted by Cecile Pineda at 12:32 PM